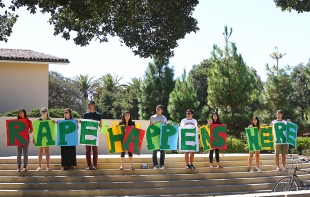 Stanford University students hold up banners to raise awareness about sexual assault as students, parents and other campus community members pass by in White Plaza during orientation week on Sept. 17, 2015. Photo by Veronica Weber.

Steps away from brightly colored welcome signs, a Cardinal red-and-white balloon arch and tables advertising campus groups for orientation week on Thursday afternoon at Stanford University stood 10 students, each holding a poster with a letter to spell out in all capital letters: "RAPE HAPPENS HERE."

The students sought to raise awareness about campus sexual assault with new students and right before the start of the school year on Monday. The first few weeks of school at colleges are often referred to as the "red zone," a time when female college students are thought to be at higher risk of sexual assault or attempted sexual assault.

Stanford University students posted fliers with resources and and other information about sexual assault in White Plaza during New Student Orientation week. Photo by Elena Kadvany.
Some of the students holding signs on Thursday in White Plaza, and others that were handing out fliers with national and Stanford-specific statistics about sexual assault, are members of a new immersive course at Stanford called "One in Five: The Law, Policy and Politics of Campus Sexual Assault."

The course, taught by law professor and sexual-assault reform advocate Michele Dauber, was offered for the first time this year as part of Sophomore College, a program for rising sophomores to dive deep into a subject of their choice for three weeks before school starts.

Over the last three weeks, the 12 students in the "One in Five" class lived and traveled together, learning from Dauber as well as politicians, law enforcement, activists and journalists about the past, present and future of rape on college campuses. Last week, the students sat in on a Congressional hearing in Washington D.C. for the Safe Campus Act, a bill that would prohibit colleges and universities from punishing accused rapists unless the person reporting the assault agrees to report it to the police.

The students returned to campus this week to complete and present their final projects for the class. Dauber distributed university policy and rules on student speech to the students, and asked them to take them into account when planning their projects.

Some students chose to hand out a flier on Thursday to students and others passing through White Plaza. On one side, the flier reminds readers that "rape happens here," and on the other side are statistics about sexual assault, students' rights under federal gender-equity law Title IX and local and national resources.

"Sexual assault plagues universities across the nation," the flier reads in all capital letters. "Stanford is no exception."

The flier notes the number of reported sexual assaults at Stanford between 1997 to 2014 (280) compared to the number of cases that have been adjudicated (18) and the number of accused students found responsible (10). Since 1891, only one Stanford student has been expelled for sexual violence, the flier notes. (Another student on Thursday held a yellow poster advertising this fact.)

As student Loralee Sepsey handed out the flier to people walking through White Plaza, three freshmen stopped to talk to her. One asked if Sepsey was part of any established student group.

Other students from the "One in Five" class handed out similar informational fliers on Wednesday night to hundreds of new students as they left one of orientation week's most well-attended events. Others posted fliers on kiosks and concrete benches in and around White Plaza with information about what to do if one is sexually assaulted as well as statistics (90 percent of rapists are repeat offenders; 7 percent of men are sexually assaulted on college campuses each year; queer students are two and a half times more likely to be sexually assaulted; 35 percent of men would rape if they knew they could get away with it).

Another student performed for the class this week a one-woman show called "Dear Stanford" (a play on the U.S. Department of Education's "Dear Colleague" letter, sent to colleges in 2011 to reinforce their Title IX responsibilities around sexual violence) in which she played various characters involved in one student's reporting of a sexual assault over the course of one week.

Other final projects included a 34-page manual for Stanford administrators, faculty and staff on handling sexual assault; an in-depth research paper exploring the impact of the trauma of sexual assault on memory; a syllabus for a self-defense class called "Fighting Back: Empowering Individuals and Combating the Epidemic of Campus Sexual Assault;" an interpretative dance; and one student's efforts to get lighting installed along an unpaved pathway on campus that students refer to as the "Scary Path" for its lack of safety.

Only one student's project received a response from the university administration. Shortly after sophomore Matt Baiza put similar informational fliers, but addressed to Stanford parents, on windshields of parked cars on campus Tuesday morning, he received an email from an administrator instructing him to "stop flyering on campus now" and that putting fliers on cars and handing out fliers is "not ok on the first day of NSO (New Student Orientation)."

Dauber, who has been working on sexual-assault reform and Title IX issues for years at Stanford, said the students' final projects have been emotional for her – not only for their content, but for their depth.

"That's what you want as an educator -- to have people take it and really not just know it and spit it back to you on tests but internalize it," Dauber said. "They started with a baseline of information on this topic that was really pretty low and now they're completely expert in the subject. To me, that's very emotional as an educator."

Student Chandler Mores, who handed out fliers to freshmen on Wednesday night, said after the three-week crash course, she feels armed with the knowledge necessary to talk confidently with members of her sorority and both male and female friends about the topic of sexual assault.

Mores plans to push for sexual-assault related education in her sorority this year as well as campuswide through her position on student government.

The Palo Alto Weekly has created an archive of past news articles, social media reaction and other content related to the ongoing sexual assault issues at Stanford University. To view it, go to storify.com/paloaltoweekly.

The first few seconds after awakening; before I remember the virus
By Chandrama Anderson | 0 comments | 3,415 views

Can you stay healthy without making more trash?
By Sherry Listgarten | 6 comments | 2,828 views

Think about helping others in our coronavirus-affected area
By Diana Diamond | 7 comments | 2,599 views