After a hard year, university hopes for better with OpenXChange 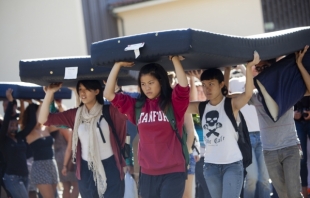 In the wake of a "difficult" and tense year at Stanford University around social and political issues like sexual assault and racial inequity, the university has launched a yearlong initiative to encourage the open exchange of ideas on campus, President John Hennessy and Provost John Etchemendy announced on Friday.

The goal of the initiative, OpenXChange, is "to strengthen the Stanford community through purposeful engagement" on both local and global issues through guest speakers, panel discussions, workshops, courses and other projects, Hennessy and Etchemendy wrote in a letter to the campus community on Sept. 10.

"For many in our community, the last academic year was difficult as pressing issues such as sexual assault, racial inequity and divestment demanded attention," Hennessy and Etchemendy wrote. "While some on campus urged the university and fellow community members to take a more active role, others hoped the dissension would 'just go away.' Tensions rose as people on differing sides of issues felt that others simply weren't listening or weren't taking the actions they thought appropriate. Some felt disrespected, while others felt silenced.

"The university thrives on intellectual debate, on the open exchange of ideas in the service of learning and the creation of new knowledge," they continue. "Indeed, a university changes the world primarily through the knowledge it discovers and the future citizens it educates. By sharing those discoveries and preparing students for leadership, Stanford hopes to make our community, the nation and the world better."

In a blog post for OpenXChange, student Logan Richard describes how the 2014-15 school year was "the most charged time" during his tenure as a Stanford student, from highly publicized sexual assault cases to discussions about how to improve student mental health to students who were arrested as part of Black Lives Matter protests.

"Students felt their voices had been silenced by administrators, community members came to see their campus as hostile and unsupportive," Richard wrote. "I was exhausted, mentally, physically, and emotionally. You learn a lot about this place the longer you're around and by the year's end, Stanford didn't shine as bright for me as it once did."

Richard is hopeful, however, that OpenXChange will serve as a jumping-off point for more thoughtful and purposeful campus dialogue in the coming year.

"Thoughtful listening, purposeful engagement, these qualities should be in tandem with the nature of campus dialogue," he wrote. "Last year, and even years before, they weren't, but we can all play a role to change that."

The new initiative will focus on a particular theme each quarter. OpenXChange will begin the fall quarter with the theme "Stanford and the World," which will examine "challenges that face us as global citizens," Hennessy and Etchemendy wrote, from fossil fuels divestment to what it means to be a "global university."

The theme for winter quarter, "Stanford and the Nation," will focus on "issues of national import," such as the criminal justice system.

In the spring, OpenXChange will address questions closer to home in "Stanford and Our Community." The divisive topics that Hennessy and Etchemendy noted in the opening of their letter, campus sexual assault and racial inequity, will be explored.

"How does our campus build a common bond and also strengthen and embrace the multiple communities within it?" a description of the spring-quarter theme reads. "How can we call all students into the discussion, while not shying away from difficult issues and being respectful of diverse voices and experiences?"

During this theme, the university might also explore "what special obligations and debts Stanford owes to its neighbors on the Peninsula or to California."

"Stanford played a key role in the founding and development of Silicon Valley; how are we or should we now be intertwined with the business and social ecosystem Stanford helped to create?" the description reads.

OpenXChange will kick off on the first day of fall quarter, Sept. 21, with a "listening tour" – a series of dinner discussions lead by administrators and staff at dining halls and centers across campus. They will answer questions about the new initiative, share information about upcoming events, discuss ways to get involved, and "most importantly, listen," the OpenXChange website reads. Vice Provosts Harry J. Elam and Greg Boardman will both participate in the series of dinner discussions, as well as others.

One OpenXChange event has already been scheduled for the fall. On Sept. 28, the university will host Egyptian political satirist Bassem Youssef to give a talk on politics and satire.

Stanford is also offering "Build It, Lead It Grants" to students or student groups who want to participate in the planning process for OpenXChange. Students can apply to become a "Build It, Lead It Facilitator and engage (their) fellow students in thoughtful, critical discourse about the issues most relevant to you." Grants will be awarded up to $1,500.

Coronavirus: Plan ahead now for a big outbreak
By Diana Diamond | 21 comments | 4,541 views

The first few seconds after awakening; before I remember the virus
By Chandrama Anderson | 0 comments | 1,447 views