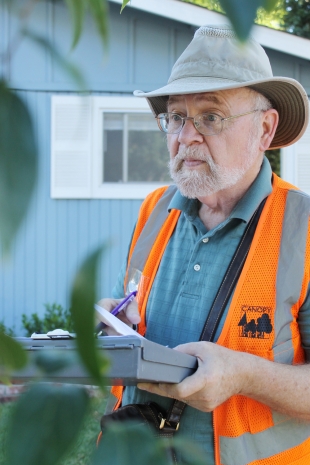 David Cortesi, Canopy volunteer, notes the tree's location and condition on a brochure for the resident. Photo by Brenna Malmberg.

Along College Avenue just north of El Camino Real, Canopy's Young Tree Care Survey manager Elizabeth Greenfield and program director Michael Hawkins stopped on Aug. 11 to survey a young tree living on the side of the street. They started at the top of the checklist that Greenfield has displayed on her phone.

They continued down the list, marking items of homeowner concern, such as if it needs water, mulch or weeding. Then, they checked off the city's responsibilities: basin rebuilding, pruning, re-staking and root clearing. After the hands-on inspection, Greenfield whipped out a tree care brochure, wrote the homeowner a note and signed it with a doodle of a tree.

This detailed tree survey is thanks to the local nonprofit Canopy. Since 2001, the organization has surveyed most of the city's trees under the age of 5. This year, 44 volunteers logged 230 hours surveying 712 trees, up from 556 in 2014. The 2015 Young Tree Care Survey spanned from July 11 to Aug. 17 and included volunteers of all ages, with a majority of them being high schoolers.

Before volunteers started their leg work, Greenfield compiled the 40 routes and created the mobile app this year to streamline data processing. After more than 100 hours of work, Canopy had a working mobile app that made the survey process easier for volunteers and allowed Greenfield to quickly turn survey data into a final report for the city.

"There are a world of little maintenance jobs that the city or someone has to do," said Canopy volunteer David Cortesi. "Tree surveys are one of them. I volunteer because you feel like you are seeding your world with good health."

Canopy's connection with the city stretches back to 1996, when the Palo Alto City Council allocated funds toward a group of residents who would serve as the community's resource for tree matters. Through the tree survey, Canopy advances its mission of "educating, inspiring and engaging the community" while providing hard data directly to the Public Works Urban Forestry Section staff. The city staff then adds this data to its TreeKeeper program, which contains data about the more than 35,000 trees in Palo Alto, said the city's urban forester Walter Passmore.

Throughout the survey and in a final report, Greenfield sent "red flag" tree notices to the city staff so they could act on them immediately. This year, only 4 percent were labeled "red flag," down from 6 percent in 2014. "Thirsty trees" also get reported, and because of the drought, Greenfield was not shocked to learn this number had risen from 39 percent in 2014 to 51 percent in 2015. When trees are marked as "thirsty," volunteers note it on the brochure given to the residents. That gives the resident a chance to correct the parchedness before the city's water truck driver makes his rounds from April to November. If the tree still needs water, Passmore said the city's water truck driver gives the tree a drink and the resident is notified.

In addition to watering, city staff replaces and fixes stakes, re-ties trees to stakes, prunes and rebuilds basins as needed. The water truck driver does much of this work during his weekly 2 a.m. to noon shift, Passmore said.

Despite drought conditions and water restrictions, the Young Tree Care Survey reported the overall health ratings are up in 2015, with 70 percent receiving a "good" or "excellent" rating, compared to 65 percent in 2014. In addition, the city has not seen an increase in fallen limbs, Passmore said. But, this good news is coupled with a slight uptick in mortality for Palo Alto's entire tree canopy. He said 410 trees had to be removed in 2014, compared with 314 in 2013 and 200 in 2012.

"In perspective," Passmore said, "it's not going to take away from our green, leafy canopy. We are still hovering at only 1 percent when you consider we have 35,000 trees."

It's thanks to the city's continual inspections and Canopy's tree survey that Palo Alto residents have access to these figures and know the trees are accounted for. Plus, new trees are planted every year to add to Palo Alto's canopy, including 712 so far in 2015.

If residents want to help support the city's trees, they can participate in next year's Young Tree Care Survey, or volunteer at a tree planting event. Dates and times can be found at Canopy's tree planting Web page.

Reed Garber, Canopy volunteer and former intern, is thankful for his own Canopy experience. Through training and his internship, he learned more about pruning and general tree care knowledge, such as how deep to plant a tree and how to cover the base with mulch. He also appreciates Canopy's planting program because it helps the community take ownership of its trees.

"It makes people respect the trees," he said. "Young trees are going to be those next big trees."

These local restaurants are donating meals to Bay Area residents in need. Here's how to help.
By Elena Kadvany | 6 comments | 11,318 views

Coronavirus: Plan ahead now for a big outbreak
By Diana Diamond | 19 comments | 4,270 views

Will the Coronavirus Save Lives?
By Sherry Listgarten | 29 comments | 3,989 views

The first few seconds after awakening; before I remember the virus
By Chandrama Anderson | 0 comments | 1,122 views