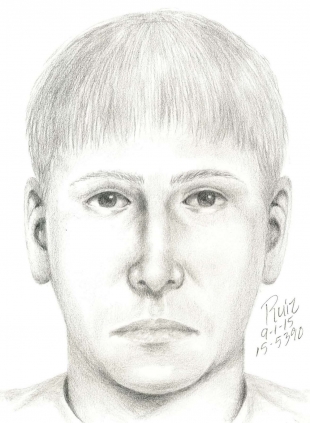 Sketch of suspect who allegedly followed a woman and exposed himself to her. The incident happened in downtown Palo Alto on Friday evening, Aug. 28. Courtesy of the Palo Alto Police Department.

There has been a large number of sex crimes in this city recently, all with similar suspect descriptions (young white man with slim to medium build). Is this an increase in crime or are victims starting to stand up for themselves? If there is a single perpetrator, surely his friends or family are suspicious of his behavior. Please turn him in before these crimes escalate.

Wouldn't it have been better to drive directly to the Police Dept. at City Hall instead of waiting 90 minutes to make the call? There seems to be more and more "flashing" going on in downtown Palo Alto. Regular patrol cars might help here, particularly in the evenings.

One of these days body-cams will be generally available for everyone. Having a video of the perp would definitely help the police, as well as engaging the public's help too.

And as has been mentioned many times--surveillance cameras would also help the police identify people involved in street crime in the downtown area.