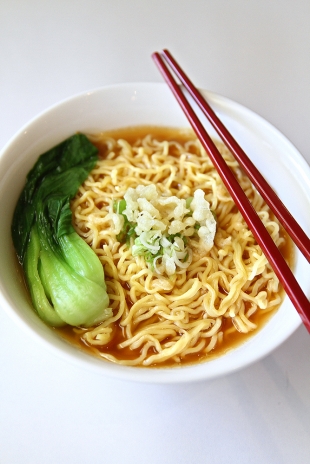 Charley Cheng is back in town, and Los Altos is very happy about it. Many people give him a hug at the end of a meal at Charley Noodle & Grill. Having served up donuts and then Chinese food for 30 years at Lucky Chinese Restaurant, the cheerful restaurateur, now in his 60s, has a tighter culinary focus this time around. The Charley Noodle & Grill menu consists of four versions of ramen noodle soup.

While Muracci's was in operation, Cheng returned to his native home, Hawaii, and ran a restaurant there. His new joint churns out Hawaiian rather than Japanese-style ramen, so the noodles are skinnier -- more like Chinese lo-mein -- than Japanese ramen noodles. In Hawaii, it's called saimin; "sai" means "thin."

Steaming bowls of soup may sound less appealing in the summer, but a visit to the air-conditioned restaurant may be just the right pick-me-up, at very little outlay. The signature dish costs $4.

One of the four ramen broths is the universal comfort food and cure-all: chicken soup. The pork version soothes the soul with a milky broth produced by long-simmered meat and bones. Its enticing aroma and savory flavor come courtesy of dried fish, kelp and onions. Similarly, miso soup goes for depth, not salt, while the fourth classic flavor offered is soy sauce or "sho-yu."

Each generous bowl of broth is stocked with a few pieces of bok choy, a few snips of green onion, curly flecks of dried tuna and a tangle of long, chewy, handmade noodles. That's it.

Cheng offers three spice levels, but you can also just ask for chili paste, and spice it to your taste.

A dozen appetizers and side dishes amplify the possibilities for personal expression. Some, such as sweet corn and fried tofu, are delicious additions to the soup. All cost $2.50 or $3.50.

Start with crisp, freshly-fried calamari. Cheng serves it in a lengthwise, easy-to-eat format on a stick.

Seaweed salad has been julienned to a whisper, marinated in sesame oil and chilies and topped with tiny sesame seeds.

Fried tofu in cubes the size of marshmallows were creamy on the inside, with a very thin, barely tooth-resistant crust.

Orchids and art posters provide decor. On the table are soup spoons, forks, and chopsticks in paper wrappers with instructions. You don't have to ask.

Service is small-town friendly but not intrusive. Everyone is greeted and thanked. Food is served very quickly. One day at lunch, the place was full and I had to wait a few minutes for a table. Still, I was done in 20 minutes, which included Cheng bringing complimentary calamari while I studied the menu.

"I think that you are hungry," he said.

A Pragmatic Approach to A Trillion Trees
By Sherry Listgarten | 2 comments | 3,460 views

The University of California’s flexible policies during COVID-19
By John Raftrey and Lori McCormick | 6 comments | 2,359 views

Repairing a Disagreement with your Beloved & “Physical” vs. “Social” Distancing
By Chandrama Anderson | 1 comment | 2,218 views