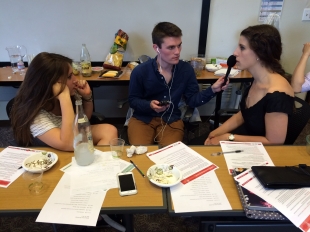 Branden grant recipients Hannah Long, left, Jack Hennessy and Kate Lindsey work together during a preparatory workshop before going in to the field to collect interviews. Photo by Will Rogers.

First-hand accounts of American drag queens and gender artists. Stories of children living in orphanages in Ghana. The experience of women after serving prison sentences in California, the beliefs of native healers in Hawaii and the origins of the American folk song, "We Shall Overcome."

These are among the audio documentaries created by recipients of the Braden Grant.

The grant was launched in 2011 by Stanford Storytelling Project founder Jonah Willihnganz, who saw an opportunity to introduce undergraduates to the art of spoken storytelling. With the rising popularity of narrative-driven radio programs such as "This American Life" and "Radiolab" and podcasts like Sarah Koenig's "Serial," which won a cult following in its first season last fall, Willihnganz wanted to give students a chance to learn how to craft an oral narrative from start to finish.

Each April, select undergraduates are awarded $3,000 each and tasked with spending the summer term out in the field researching their topics, conducting interviews and collecting sound files for their projects. Funding comes primarily from the Office of the Vice Provost for Undergraduate Education and from private donors, including Stanford University alumnus Bruce Braden, for whom the grant is named.

Now in its fifth year, the Braden Grant has proven increasingly popular with undergrads. The applicant pool has doubled each year since the grant's inception, Willihnganz said. This April, 11 students were selected to embark on an eight-month adventure, beginning with training in narrative techniques, interviewing skills and audio technology and ending with the submission of their 20- to 30-minute audio projects, which will be broadcast on Stanford's KZSU this winter and archived on the Storytelling Project's site as well as with PRX, the Public Radio Exchange.

According to Willihnganz, the most important preparation Braden grantees can have has nothing to do with broadcast experience or even a background in writing. Instead, he and his team look for students who are deeply invested in a research topic and eager to approach their subject in ways they wouldn't in the classroom.

"They all have an intellectual commitment to their projects," said Willihnganz of this year's grant recipients. "They're interested, and they want to do something beyond writing a paper about it."

"There was definitely a 'wow' factor in the projects we chose this year," added Grants Manager John Lee, "an interesting or fresh take on an issue, an interesting community that may be overlooked or underheard."

Giving voice to the voiceless, exposing little-known stories and introducing audiences to topics they might otherwise never know about are some of the core interests of the Stanford Storytelling Project. To that end, the Braden Grant encourages applicants to choose either a specific community or historical event that has not already been well-documented. In either case, students must consider the potential of the topic for the audio storytelling format: Who can be interviewed, what other sounds might be captured, and how might the subject lend itself to a narrative arc?

Telling a story out loud is a distinct art from writing it as a text. As Lee observed: "There's something about hearing the human voice. You can't put it down. It's ephemeral. Listening in a focused way requires you to fill in with your imagination. I think in that way it's a unique medium."

Though one might expect the students attracted to such a project would have academic focuses in the arts and social sciences, Willihnganz noted that from the start the grant has attracted students from a diverse range of disciplines. Among the recent recipients have been international relations, human biology and political science majors as well as those pursuing degrees in creative writing, sociology and philosophy.

Jack Hennessy and Hannah Long were awarded a Braden Grant this year to pursue a joint project documenting the experience of lesbian, gay, bisexual and transgender (LGBT) Iranian refugees living in Turkey. The inspiration for the project came from a class on the politics of modern Iran the two took with Professor Abbas Milani, director of Iranian Studies at Stanford. Hennessy wrote his final paper on LGBT politics in Iran.

"It's a fascinating issue," explained the 21-year-old international relations major who will begin his senior year this fall. "The way those sub-populations are treated is totally different. Homosexuality is a crime potentially punishable by death in Iran, while the transgender community is relatively socially accepted. Sexual-reassignment surgery is actually funded by the state; in fact, Iran is second in the world after Thailand for the number of people who undergo sexual-reassignment surgery."

In working on his paper, Hennessy said he confronted the fact that there weren't many primary sources; neither the stories of those living in Iran nor those who had fled the country were well-documented.

"I thought it would be great to do a research project to bring these narratives to the fore," Hennessy said.

He approached his friend and fellow junior, Long, an Iranian-American who he knew spoke Farsi and might be interested in working with him to interview Iranian refugees.

"It was an issue I was already interested in," said Long, explaining that she had done some refugee-asylum work in the past.

Long said she hopes their final project will reach a wide audience.

"We're really tapping this untouched group of people and telling a story that hasn't been told before," she noted. "I think there's a big lack of understanding about what goes on in Iran -- there's a lot more nuance than people think."

Finding the nuance and humanizing complex topics is a shared goal among grant recipients, regardless of their subjects.

Nineteen-year-old rising junior Yegina Whang will spend much of the summer in Seoul collecting interviews for her project. Her aim is to tell the stories of Korean "comfort women" -- women and girls were forced into sex slavery for the Imperial Japanese Army during World War II.

"I want to record first-hand accounts so that these stories will not be lost forever once all the comfort women pass away, and I want to see what lessons we can take away from their experiences coping with their tragic circumstances," Whang explained in an email. "I hope to understand the war through the perspective of these women instead of the dominant narrative we are taught in schools in the U.S. I also want to see how their healing processes and coping mechanisms can be applied to how we treat victims of human trafficking today."

Aside from understanding her subject more deeply and sharing it publicly, Whang said she hoped the process of conducting interviews might bring some relief to her subjects.

"I hope to give these women some solace knowing that the darkest moment of their lives was not meaningless, and perhaps this will help with their ongoing healing process," she wrote.

Once students like Hennessy, Long and Whang return from their summer travels with hours of raw interviews, the work of crafting an audio narrative begins. Last year's Braden Grant recipient Christine Chen, who traveled to Ghana to learn about the country's orphanages, said the complexity of this part of the process took her by surprise.

"I had expected the interviewing process to be the hardest part," she explained. "Then I came back with 12 hours of tape and I had to transcribe all of them. That was my full-time project for about a month. Next, there was figuring out the story: how to craft it and which people to feature."

A human biology major, Chen was so excited by the process of creating her documentary that she joined the staff of the Stanford Storytelling Project, where she works on the web team in addition to her full-time studies.

"The experience of breaking out of your shell and talking to people for an interview is a great experience," she said. "The Braden Grant let me meet people I otherwise would never have met."

Chen's final audio documentary, "Seen and Heard: Voices from Ghana's Orphanages," can be heard online at tinyurl.com/l5manw5, along with the projects of other past grantees. This year's documentaries will be aired on Stanford's KZSU in late 2015 or early 2016; updates will be posted on storytelling.stanford.edu.

Beyond that, the documentaries may well go on to future lives on other radio stations or be transformed into longer or shorter audio documentaries for other purposes. Chen is already working on a new edit of her story she hopes will be broadcast more widely. No matter where it leads, Chen said, the Braden Grant was an opportunity to learn from her fellow students about people and places all over the world and to appreciate the power of listening to a carefully crafted true story.

A Pragmatic Approach to A Trillion Trees
By Sherry Listgarten | 2 comments | 3,459 views

The University of California’s flexible policies during COVID-19
By John Raftrey and Lori McCormick | 6 comments | 2,359 views

Repairing a Disagreement with your Beloved & “Physical” vs. “Social” Distancing
By Chandrama Anderson | 1 comment | 2,218 views