The jazz days of summer 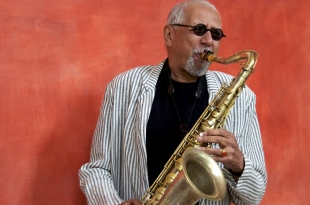 One of the paradoxes of summer is that while the Stanford on-campus population thins out, the jazz activity increases exponentially. The annual Stanford Jazz Workshop (SJW) is an internationally recognized camp for middle school through adult students. Its sibling Stanford Jazz Festival (SJF) is a series of related concerts that runs on campus from June 20 through August 8 and features many of the SJW faculty members.

The diversity of programming is impressive, ranging from straight-ahead and country-influenced jazz and the blues to Afro-Cuban, Brazilian and Indian styles. "The faculty brings a tremendous amount of diversity," said Jim Nadel, SJW and SJF founder as well as executive and artistic director.

"But then I look to see what else we need, because we want to have a lot of different kinds of music represented."

Pianist and vocalist Eliane Elias, whose group opens the SJF on Saturday night, June 20, at Bing Concert Hall, is a perfect example. "She plays the piano like Bill Evans, if she wants to, but she's got the Brazilian thing, too," said Nadel of the São Paulo native.

"She's also a wonderful singer. There's something about hearing the lyrics to a bossa nova song in Portuguese and then having great jazz playing underneath that's very compelling."

In a perhaps unplanned reflection of local demographics, the India Jazz Generations show at Dinkelspiel Auditorium on Sunday, June 28 is a historic local first.

"A grandfather (Vikku Vinayakram), a father (V. Selvaganesh) and a son (Swaminathan Selvaganesh) are going to be on the stage at the same time, playing with a great band that includes (saxophonist) George Brooks, (pianist) Osam Ezzeldin and (bassist) Kai Eckhardt," said Nadel.

"That's going to be something extraordinary that's never played in the Bay Area."

"What can you say about James Farm? They're phenomenal and one of my favorite contemporary bands," Nadel declared. "Josh Redman is a brilliant, brilliant artist, of course. And he's teaching here, too."

A chance to learn from jazz greats -- and to see them perform live?

"That's what makes our educational programs so special," Nadel said.

What: Stanford Jazz Workshop and Festival

Where: Various venues at Stanford University

THREE TO GET READY

With so many quality concerts being presented over the next week, it's hard to know what to pick. Here are three festival highlights:

Due to contractual stipulations, the SJF can't advertise the blues artist who's playing this show. But they're allowed to name this three-time GRAMMY winner on its website. Hint: He's known for his collaborations with the likes of fellow guitarists/vocalists Bonnie Raitt and Kenny Wayne Shepherd, music legend Ray Charles and bassist/producer/multi-instrumentalist Marcus Miller. (Dinkelspiel Auditorium, July 19, 7:30 p.m., $15-$55)

Writer, musician and columnist for The Daily Beast, Ted Gioia is an enthusiastic fan of both Jim Nadel and the Stanford Jazz Workshop and Festival. The author of nine books on music -- including the highly recommendable "The History of Jazz" and "The Jazz Standards: A Guide to the Repertoire" -- he earned both an undergraduate degree in English and an M.B.A. from Stanford. In advance of the 2015 SJW and SJF, the current Dallas resident participated in an interview via email.

PAW: How do you and Jim know each other?

TG: I first met Jim Nadel when I was a grad student at Stanford -- this was back in 1982. I was teaching a class on jazz history for Stanford, and Jim was in the process of ramping up his summer jazz program.

PAW: What do you remember about Jim's enthusiasm for/love of jazz and how he manifested it?

TG: They should put up a statue of Jim Nadel on the Stanford campus. He has done more for jazz at Stanford and in the surrounding community than anyone else, and number two isn't even close. And he has done it with very little outside support, especially in the early years when he made things happen through sheer determination and passion for the music.

He brought Stan Getz to Stanford, and without Jim's intervention, Getz would never have been hired as artist-in-residence. He brought Dizzy Gillespie to Stanford. And McCoy Tyner, Phil Woods and a host of other jazz legends. My own development as a musician and jazz historian was immeasurably enriched by these initiatives, and I am just one of many who have been inspired by these efforts.

PAW: Finally, what's the non-local view of Jim and the Stanford Jazz Workshop?

TG: In the early years, Jim's influence was felt mostly on the Stanford campus and the surrounding community. But now it's gone global through the many former Stanford Jazz Workshop students who have become leaders in the jazz world.

He has trained two generations of jazz players, and has had a lasting positive impact on thousands of performers. What a remarkable legacy that is!

The University of California’s flexible policies during COVID-19
By John Raftrey and Lori McCormick | 6 comments | 2,355 views

Repairing a Disagreement with your Beloved & “Physical” vs. “Social” Distancing
By Chandrama Anderson | 1 comment | 2,214 views