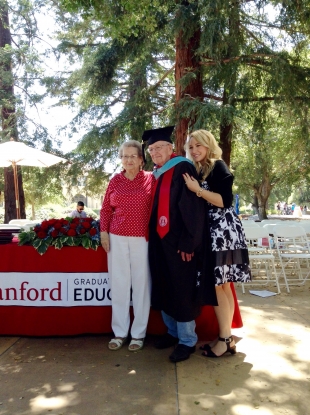 Bonnie Gould, who received his master's degree from the Stanford Graduate School of Education 61 years ago, poses with his wife Margaret and granddaughter-in-law, who both encouraged him to attend this year's commencement ceremony. He missed his official ceremony decades ago. Photo by Jamauri Bowles.

What a lovely story. I hope Bonnie and his family enjoy the diploma in good health! Thank you for all of your contributions to society.

Thank you, Bonnie for your service to our country and to the young people you taught. Blessings to you and yours!

Report Objectionable Content
Email Town Square Moderator
7 people like this
Posted by Wonderful!
a resident of Another Palo Alto neighborhood
on Jun 17, 2015 at 9:54 am

What a great story! Congratulations to Mr. Gould and thank you for your many contributions to our country!

Report Objectionable Content
Email Town Square Moderator
5 people like this
Posted by Julia Li
a resident of Mountain View
on Jun 17, 2015 at 1:03 pm

What a wonderful story! I like it very much.

Report Objectionable Content
Email Town Square Moderator
4 people like this
Posted by Pat
a resident of Menlo Park
on Jun 19, 2015 at 4:33 pm

Great story... couldn't take my eyes off of it until I read the very last word. Congratulations Mr. Bonnie Gould!

As Gould did,I can tell you how I feel about your article in four simple words: "I'm excited about it".

Flying: How to lower your impact
By Sherry Listgarten | 7 comments | 1,776 views