School board to discuss schedule changes at Tuesday meeting 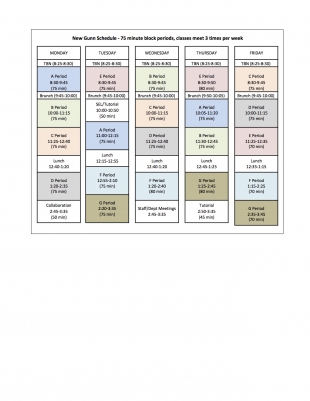 Gunn High School could have a new 75-minute rotating block schedule starting this fall, per the recommendation from the school's Creative Scheduling Committee.

Though a change in the fall to the new schedule may be ill-timed--it's asking a lot of a campus exhausted by controversy, the national spotlight, hard work, a labor dispute, and grief piled on grief--it's good to see that thought is being given, for a change, to the regular hardships of the school day and a practical fix, with special concern for the breathing room that makes for good student-teacher connection.

More such breathing room, and the means to create it, are advocated by Save the 2,008, a community initiative to revive the heart of school.

Our proposals are for friendlier class-sizes, better counseling about the burden of APs, a way for students and teachers to dialogue about homework loads, an end to all-day access to texting, Instagram, Twitter, Snapchat, etc., a diminished bombardment of grade reports, and relief for students from the rampant cheating.

You're welcome to read the "Open Letter to the School Board and the Superintendent," at the S2K8 website--already signed by 275 teachers, doctors, professors, engineers, LMFTs, psychiatrists, etc.--and please do sign if you'd like to help bring change.

I'm guessing the Tuesday morning Tutorial might be a time for students to catch up on sleep ;)

I hope this is approved and started this fall. Our teachers earn six figures and want summer vacation too? Gunn is in a crisis and change must start now (it should have started 9 years ago).

Report Objectionable Content
Email Town Square Moderator
4 people like this
Posted by Gunn Alum
a resident of Gunn High School
on May 9, 2015 at 8:19 am

Looks like the schedule we had at Gunn in the early-90s. Not sure why it changed back to all 7 classes every day, but don't be surprised if history repeats itself in a few years.

Report Objectionable Content
Email Town Square Moderator
7 people like this
Posted by Ze'ev Yehuda
a resident of Gunn High School
on May 10, 2015 at 12:01 pm

Not as bad as many of us thought. I'm not a fan of packing everything on on Friday, because that would lead to an end-week rush, especially with most tests pushed to then. Make Wednesday the 5-period day instead of Friday, and I'm set.

Report Objectionable Content
Email Town Square Moderator
23 people like this
Posted by Gunn Student
a resident of Gunn High School
on May 10, 2015 at 12:04 pm

To clarify, we do NOT have all 7 periods every day. We have a modified block schedule, with 5 to 6 periods in one day.

I have a few concerns with this proposed schedule:
1) Some classes meet 75-80-70 minutes and others meet 75-75-75 minutes. For teachers teaching the same class in multiple periods, they need to come up with something that only takes 5 minutes, that they can append to one class at the end and to another class at the beginning – this seems impractical.
2) I asked multiple teachers how they would change the homework load and they told me they wouldn't. It would just be subdivided into fewer chunks. Homework is a necessary part of our education that does not require teacher supervision. We are paying our teachers to teach, not to supervise busywork and other practice of concepts that can easily be done at home. Now, either we will have an equal amount of homework but more due every class period, or more instructional minutes wasted on practice and less on new concepts.
3) We are losing instructional minutes in each class!
4) Everybody says that the current Gunn schedule is hard to remember. However, if you are a Gunn student, you soon realise that there is a simple method: All you need is basic addition and some start times. This new schedule, however, has a different set of times for every day, and varying class period lengths only serve to increase confusion. Furthermore, there is no obvious pattern as to which periods succeed which periods in the new schedule, as we currently have. Because every start/time is a multiple of five minutes, they are actually less memorable.
5) E period meets Monday-Thursday-Friday. Such a large break between the first two days of class in the week is obviously suboptimal.
6) Even in general, fewer instructional minutes spread over fewer blocks of time serves to reinforce material much more poorly, as has been proven by myriad studies.

Please take a moment to reflect whether the call for a new schedule came from the Gunn students, the Gunn teachers and faculty, the Gunn parents -- or whether it primarily came from members of the Palo Alto community only loosely affiliated with Gunn, if at all.

Report Objectionable Content
Email Town Square Moderator
2 people like this
Posted by One Gunn Parent
a resident of Greendell/Walnut Grove
on May 10, 2015 at 7:13 pm

Thank you to the committee for your time and hard work. I think this sounds like a stress reducing step forward for students and teachers. Having experienced back to school night many times at Gunn, the constant racing across campus to reach a classroom in time, carrying backpacks, food, needing a bathroom stop, seeing friends, stressing over a quiz, it's a lot of stimulation. I think that overall, the longer classes and transitions will bring down the level of stress. Yes, students who need to get up and move will have to find ways of coping, ie a bathroom pass? but fewer distinct classes each day will be great! I had a similar schedule to the current Gunn musical rooms circus when I was in middle school and it was awful. Please give it a chance and work out the kinks.

Report Objectionable Content
Email Town Square Moderator
7 people like this
Posted by Ok
a resident of Gunn High School
on May 11, 2015 at 6:23 pm

This is an unnecessary and useless change. I don't know how anyone could possibly think that this change would decrease stress. If anything, I'd argue that this would increase the amount of stress placed onto students, since there are sometimes large chunks of time in which a student will not be attending a class, leading to students needing to constantly refresh themselves on material. Also, it creates a huge burden for teachers who will need to completely shift their lesson plans; for example, some lessons that teachers currently have planned may need to be split or completely revamped in order to account for the new schedule. Don't waste time on making a change that will be ineffective. From this proposed change, it's clear that Principal Herraman is incompetent and incapable of making the changes that are actually necessary. By the way, this occurred at her old high school as well:

Frankly, Gunn would be better off putting its time towards something that actually requires a change, rather than something as trivial as the bell schedule.

Report Objectionable Content
Email Town Square Moderator
Like this comment
Posted by Gunn Parent as well
a resident of Gunn High School
on May 12, 2015 at 8:21 pm

Change is hard for some people. There are supporters and naysayers. Whether this change is good or bad, it will prove itself out. Providing links to Principal Herrmann's previous school/issues doesn't prove anything. It merely reflects the similar reactions we are seeing here, but with different circumstances surrounding it. I'd be interested in seeing how successful/unsuccessful they were with their transition in Bell schedule, if it was ever implemented. Plus, this has *multiple months* advance notice. It's not like it's being implemented tomorrow.

With anything new, it will be "bumpy" in the beginning for *everyone*. It needs to be given a chance and time to settle for all parties...give the staff/administration/kids time to experience it/work out the kinks. This change in the Bell schedule seems like it'll help (my younger daughter's public school uses a block schedule and it works well). Lots of things at Gunn can be improved, but it's better than status quo. And it's one area that *can* be changed when looking at possible student-centric improvements vs. things we'd like to change, but won't ever see in our lifetimes.

Thank you to the committee participants for their hard work. I know balancing all the concerns wasn't easy. Our family is approaching this change with a positive attitude and hope it has the community's desired outcome on all levels. We're looking forward to the next school year (which wasn't always the case previously).

Report Objectionable Content
Email Town Square Moderator
6 people like this
Posted by Mother of three Titans
a resident of Gunn High School
on May 12, 2015 at 9:07 pm

Hey kids, when you're generally pretty well burnt from a long week of homework, quizzes, tests, logs, papers, projects, and extracurricular activities, you get to go to FIVE classes on Friday. Super lucky!

@ Gunn mother of 3... not sure I'm following your point. 5 "possible" classes on Friday compared to what is "possible" in the current Gunn schedule - 6 (or if you're among the current zero period classes - a "possibility" of 7 classes on 2014-2015 Fridays).

No sarcasm intended - I truly want to understand your point. (that you would prefer that Gunn adopted a longer-sessioned-but-fewer-periods block schedule like Paly?) Or?

Report Objectionable Content
Email Town Square Moderator
4 people like this
Posted by Paly Student
a resident of Crescent Park
on May 17, 2015 at 12:55 pm

Looking at this I feel bad for the Gunn students and teachers.

Let's say a teacher has different periods of the same class. Some periods have 70 minutes some 80 some 75. How do they even plan lessons or tests?

Students at Paly Finish early 2x a week, where as Gunn kids will now not officially get out before 3:35 a single day.

The most number of classes on Friday - Doesn't sound any better than the old schedule. Just going to pile on homework for the week.

One class meeting Monday, Thursday, Friday - Teachers teaching multiple periods of the same cannot standardize homework among their periods because each period will have a random number of days (1-3) to do it.

this is the kind of "block" schedule in place at Gunn in the late 60's until at least '71 when I graduated. Was considered one of the innovative features of the new high school, which was opened in 1964. I for one loved it; meant that in an art studio a student could actually have time to work on a project, in chemistry lab time to fully conduct and execute an experiment.