No patients, only dancers 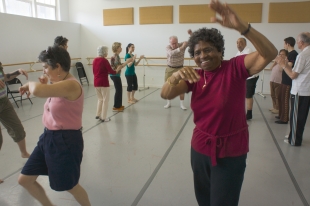 Students Bobbye Butts (left) and Leonore Gordon take part in a Parkinson’s dance class in Brooklyn, New York. Butts is the spouse of a Parkinson’s patient. Photo by Eddie Marritz.