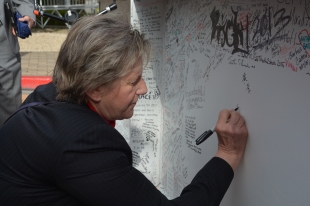 If the nursing and doctor care, but particularly the post-surgery nursing care, I received hasn't improved, it won't be a state of the art hospital. No amount of technological and design improvements will fix what I have experienced as deep systemic issues with how Stanford doctors and nurses relate to hospitalized patients. That makes it a second rate hospital in my mind. That said, I know the hospital staff has recognized it has problems, and I do believe they are attempting to address them. It will take a long time, and I just hope I don't have to be there in the interim.

I volunteered in the Emergency for 32 years and when I left last year not a single person, staff, nurses, doctors let me know either by email or mail that I was missed. The attention in the hospital has shifted from care for people to care for corporations and the bottom line. Very disappointing!

1 person likes this
Posted by Former Patient
a resident of Another Palo Alto neighborhood
on Mar 24, 2015 at 3:30 pm

I have been admitted twice to Stanford Hospital, with several years in between the two visits. I have vowed never to be admitted their again, and even have a letter that I keep in my wallet in case of emergency that directs any paramedic to take me to El Camino Hospital instead.

Stanford Hospital's surgical and post-surgical care is often careless, unethical, and neglectful. On neither occasion did I ever see a nurse after 9:00 pm, even though various alarms sounded. Medical students are often un supervised, and always under-supervised. Nurses blame their poor care on the Nursing shortage.

Yet, their charges are the highest in The Bay Area. I have paid far less for better care.

No wonder so many insurance companies are eliminating them from their provider lists!

Likelihood to recommend is above 90%, so for every naysayer there are 9 others who are overwhelmingly happy with the care. Honestly, never saw a nurse after 9pm? You have a card that says don't take me to Stanford? Says more about the posters than it does the staff.

Take a breath people. Don't paint a whole organization with the same brush based on an experience.

You can put lipstick on a pig but it's still a pig. Healthcare skills @ this facility are neither in their goals or mission statement.

I guess these studies must be bogus:

Since 4 Palo Alto residents hate stanford hospital.
As they say cast not pearls before switching me.

@Agenda, I've been lucky to mostly avoid hospitals, and have never really looked at rankings.
USNews seems to be undercounting doctors at Kaiser (where I'd end up).
Their rankings show 47 doctors at Santa Clara, an anomalously low number.
Kaiser's website claims over 700 at the Santa Clara location.

All hospitals have problems...this nation has a healthcare crisis if you haven't heard. But Stanford is working hard to improve care and really listening to it's patients and their families. I know- I am a patient and part of one of their several patient advisory teams. In these groups we work side by side with docs, nurses and administrators to fix things that affect our experience. I've been doing it for two years and I've seen real change. Stanford is one of the first hospitals in the country to invite their patients to work directly with them. Try doing something constructive with your concerns!