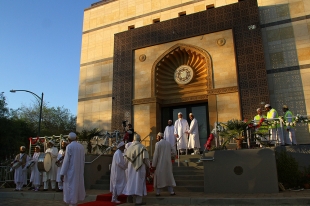 Men gather outside Palo Alto's first freestanding mosque, awaiting the arrival of Syedna Aali Qadr Mufaddal Saifuddin, the 53rd leader of their sect, who traveled from India to bless the mosque on Saturday, March 7, 2015. Photo by Veronica Weber.

A religious figure arrives in a Bentley. Welcome to one of the reasons I'm an atheist.

30% of India lives in the kind of poverty that the average American can't even fathom. Yet the high priest gets to drive around in a Bentley.

[Portion removed.] When will the so-called moderates in Islam stand and CONDEMN (in the streets!), with a demand that the Koran be interpreted away from violence?

Palo Alto liberals should not be representative of the reality on the ground. Political Islam needs to be condemned by our PA leaders. This new mosque needs to stand up and shout it out..."NO MORE political Islam...we condemn it!...and we support secular ideas that are part of the American tradition" .

Report Objectionable Content
Email Town Square Moderator
12 people like this
Posted by Stan the Man
a resident of Midtown
on Mar 9, 2015 at 5:10 pm

Report Objectionable Content
Email Town Square Moderator
25 people like this
Posted by Stop the Trolls
a resident of Mountain View
on Mar 9, 2015 at 5:23 pm

It never fails -- the minute a publication such as the Palo Alto Weekly posts a story about Muslims in this area, the haters and the ignorant come out of the woodwork.

Never mind, of course, that none of these characters had ever actually met a Muslim in their entire lives...

Report Objectionable Content
Email Town Square Moderator
5 people like this
Posted by Agenda
a resident of Another Palo Alto neighborhood
on Mar 9, 2015 at 5:29 pm

Check out this link

There is a playbook for spreading this hatred

Report Objectionable Content
Email Town Square Moderator
4 people like this
Posted by rick
a resident of Midtown
on Mar 10, 2015 at 1:48 am

rick is a registered user.


That link is to Norman Lear's left-wing playbook.

Report Objectionable Content
Email Town Square Moderator
11 people like this
Posted by Bru
a resident of Crescent Park
on Mar 10, 2015 at 1:51 am

Bru is a registered user.


Agenda, do you suppose you can dig up a link to the Muslim playbook for us?