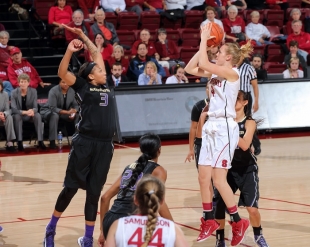 Senior Taylor Greeenfield was 2 of 3 from 3-point land ans 2 of 2 from the foul line in Stanford's 60-57 loss to Arizona. Photo by Bob Drebin/stanfordphoto.com