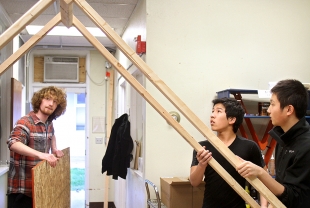 From left, Jeremy Trilling, a student at Nueva High School in San Mateo, Orion Tran, a student at Paly, and James Wang, a mentor at MakeX, lift a wooden frame which will be built into a shelf on Jan. 2. Photo by Veronica Weber.

Places like this are exactly what Palo Alto needs to build community: third places that are opportunities to make, meet, and collaborate. Adding a creative dimension to the work/school/eat institutions we have more than enough of...

'Where exactly is this center?

I was hoping that the teen center at the Mitchell Park Library might be something of this nature. Instead it's clean and lovely and probably not too supportive of creative messes. Or is there another plan for it?

And, might something of this sort be made available for adults? Could this be in the plan for the next iteration of Cubberley?

Like this comment
Posted by Seatbelts and smoke detectors, Batman
a resident of Gunn High School
on Jan 9, 2015 at 11:42 am

I am all for this, and have a power-tool-using-engineer-family space at home. But... for the same reason I am insisting at home that we get one of those Stop-Saws... I'm wondering, is the table saw here a Stop Saw? (Basically, it throws a pin in the blade if it senses a human being in the blade and stops it cold, really works apparently. Ruins the saw blade and usually involves an injury still, but saves digits and more.)

Having something like that won't keep people from being and learning to be careful anymore than having a seatbelt in the car makes you more likely to run into brick walls at high speed. But, it's a good thing to reduce potentially serious injuries, allow kids to use one of the most dangerous of power tools, a table saw, without as many risks of catastrophic harm that can and does happen even with experienced adults, and would probably reduce liability.

Maybe they already have one. If they don't, just a hint to our well-heeled community ... they cost a few thousand dollars, but are priceless insurance.

Report Objectionable Content
Email Town Square Moderator
3 people like this
Posted by Barack Obama
a resident of Professorville
on Jan 13, 2015 at 9:00 pm

MakeX is the bees knees