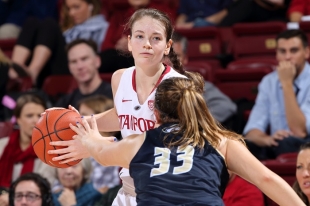 Like the rest of her Stanford teammates, Bonnie Samuelson headed home for some quality family time during the Christmas break.

In the Samuelson family, that meant plenty of time shooting baskets in the driveway of their Huntington Beach home.

She helped start the holidays with her best college performance yet on Monday, scoring 30 points to help the Cardinal women's basketball team stop a rare two-game losing streak with a 71-59 win over visiting UC Davis before heading home.

By the time No. 16 Stanford gathers to play UC Santa Barbara on Sunday at 2 p.m. in Maples Pavilion, Cardinal coach Tara VanDerveer hopes to have some other things figured out.

Stanford (7-4) needs to find a consistent scorer, more than one rebounder and more time to learn its new offensive system.

The Cardinal averaged 43 points on its two-game, two-loss trip through Tennessee last week, shooting a combined 26.7 percent from the field while falling to Chattanooga and Tennessee.

"We're playing a lot of young kids in a new system and we're struggling," VanDerveer said. "We have to figure it out. We have a lot to learn and we're counting on improving. We need the seniors to let everybody know how tough it's going to be."

Those 'kids' have also endured one of the toughest schedules in the nation to open the season.

"Hopefully we've learned things from playing that schedule," VanDerveer said. "It's going to be a battle for us every night. We don't have someone who had 25 points on 60 percent shooting every game and we don't have someone to throw the ball inside to."

However, the Cardinal does show promise. Nine players have reached double figures in scoring at least once this season though none has shown any consistency.

Thompson was shooting 51 percent after her first four games and has shot 27 percent since.

"Lili is totally pressing," VanDerveer said. "She came out of the gates with big games against top teams and she thought she had to do that all the time."

Senior Amber Orrange has shown that scoring is not the only way to contribute to success. Orrange scored eight points against the Aggies, but also had had four assists against one turnover and four steals and continues to be a steadying influence on the court.

Thompson shows signs of understanding the new system and of being patient with herself. She did not force much against UC Davis.

"Lili gave me a couple of nice passes," said Samuelson, who did miss her first two free throws of the season and end a streak of 44 consecutive dating to last year. "Our offense is struggling but we are working through it. We're still trying to find our way."

Freshman Kaylee Johnson leads the team in rebounding, averaging 11.8 per contest after recording her second double-double with an 11-point, 11-rebound effort against the Aggies.

Johnson is the only player to reach double figures in rebounds through 11 games, though Sophomore Erica McCall has grabbed nine on two occasions and Orange had nine in Stanford's season-opening victory over Boston College.

McCall averages 5.0 boards and Orange is next at 4.3. McCall, who did not start for the first time all season on Monday, could be the key in helping Stanford maintain its inside presence.

"Our posts are young," Samuelson said. "That's been a big focus for us and everybody is working hard every day."

The Cardinal fell out of the top 10 for the first time since being ranked 11th on Jan. 29, 2009, a season that ended in the NCAA championship game. The last Stanford has been ranked as low as 16th was in January of 2006.

The last time Stanford has been ranked lower than 16th was a No. 24 rating in January 8, 2001 before falling out of the top 25 for the last nine weeks of the season.

The Cardinal has an average ranking of 6.6, fifth best in poll history behind Connecticut's 4.2, Tennessee's 5.0, Louisiana Tech's 5.8 and Wayland Baptist (43 weeks ranked) at 5.9.

What it means for Stanford moving forward is that these are the worst of times, a situation rarely encountered. Yet when the Cardinal has faced such adversity in the past, the team responded with energy and commitment.

The 54-46 loss to host Chattanooga last week was the first time Stanford fell to an unranked, nonconference opponent in 15 years.

The Cardinal still plays defense, having held its last four opponents under 60 points. That's reason enough to think this group is far from finished.

The first few seconds after awakening; before I remember the virus
By Chandrama Anderson | 0 comments | 2,342 views

Can you Stay Healthy without Making More Trash?
By Sherry Listgarten | 2 comments | 1,645 views

Think about helping others in our coronavirus-affected area
By Diana Diamond | 2 comments | 1,227 views