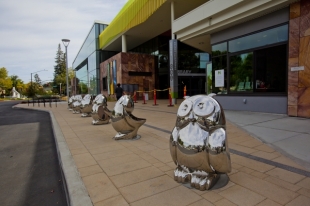 "Wise and Whimsy," an art installation by artist Brad Oldham are featured at the entrance to the Mitchell Park Library and Community Center. Photo by Michelle Le.

2 people like this
Posted by Anonymous
a resident of Another Palo Alto neighborhood
on Dec 24, 2014 at 8:26 am

These are people who clearly don't have enough to do.

4 people like this
Posted by Resident
a resident of Another Palo Alto neighborhood
on Dec 24, 2014 at 8:57 am

What is worse, the council discussing this or the Weekly for writing such a long report.

A bit of common sense is all that is needed.

Now if it were a discussion to do the upkeep of the Baylands Boardwalk and Interpretive Center, we don't need any art because there is plenty of natural beauty there anyway. However, I think the council wants to ignore upkeep of areas of natural beauty and instead put ugly monstrosities near buildings that should be as invisible as possible.

I saw those excessively shiny owls for the first time and looked at them carefully to see what they were for. The backs look like they could be seats but are too slanted and wont work. Eyecatching and ridiculous. And expensive.
They are only one example of the bad taste and big expensive signage in that bloated cavernous structure. No matter how many times the City Manager tells us how wonderful it is, you can judge for yourself what a big, big, tasteless waste of money it is.

Report Objectionable Content
Email Town Square Moderator
2 people like this
Posted by Resident
a resident of Another Palo Alto neighborhood
on Dec 24, 2014 at 1:25 pm

I actually like the shiny owls at the new library. They are great eye catchers and children enjoy them. I think they are good for perching on rather than sitting for a long time.

Much better than the hideous looking pile of lego bricks by the parking lot. Shows exactly what public art is supposed to be, some suit one person's taste and some suit others. As long as they don't rust or cause an accident. I am happy enough with them.

But, a library is a place to find some art.

Utility boxes is not.

Report Objectionable Content
Email Town Square Moderator
1 person likes this
Posted by Sparty
a resident of another community
on Dec 24, 2014 at 1:40 pm

Sparty is a registered user.

Report Objectionable Content
Email Town Square Moderator
2 people like this
Posted by curmudgeon
a resident of Downtown North
on Dec 24, 2014 at 2:12 pm

"When people think about public art, they often think of things like the egg-shaped "Digital DNA" sculpture at Lytton Plaza"

I try not to think about that pile of hazardous waste (lead, mercury, etc,). Likewise our city officials.

Report Objectionable Content
Email Town Square Moderator
2 people like this
Posted by History Buff
a resident of another community
on Dec 24, 2014 at 4:58 pm

> "Elise DeMarzo, the city's public art manager, noted that the general language in the existing policy requires staff to engage in lengthy consultations with various departments to figure out whether and how to apply the policy."


Report Objectionable Content
Email Town Square Moderator
3 people like this
Posted by field trips
a resident of Another Palo Alto neighborhood
on Dec 26, 2014 at 7:17 am

The City staff should take field trips around the Bay Area, like Menlo
Park for example, and down to San Diego and look at La Jolla Blvd to
see how other communities handle street signage, street markings,and
other streetscape modifications which are effective and don't completely
detroy the character and ambiance of the district or neighborhood.