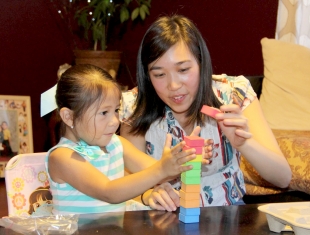 A child and a 10 Books A Home volunteer work on a learning activity at the child's home. Courtesy Paul Thiebaut III.

Great article! My Nguyen deserves ample credit for capturing the essence of 10BH. Volunteer Role Models deserve a standing ovation for the compassion and learning they bring to children and families.

As an afterthought, I’d inquire of all readers, how much credit do you attribute to your parents for your successes as an adult?

Great article! In answer to Paul's question, my parents didn't go to college, but they highly valued education and set that tone in our home. We were always surrounded by books and were read to as children. We didn't have much money, but they signed up for a Children's Book of the Month club for my sister and me because it was so important to them. They had strong goals for us to be successful in school and in careers, beyond what they had been able to accomplish themselves. There was never any question that my sister and I would go to college.

Got to wonder just how effective this person's efforts would be if they recorded these sessions and uploaded the videos to Youtube? And as for books in the home--with e-readers getting to be as cheap as they are, and millions of books on-line, why wouldn't a person living in the Silicon Valley who is interested in increasing basic literacy be looking to exploit the Internet/World-Wide-Web more than time consuming face-to-face interactions with those believed to be in need?

Report Objectionable Content
Email Town Square Moderator
5 people like this
Posted by Stop the Trolls
a resident of Mountain View
on Nov 29, 2014 at 4:10 pm

@Wondering? -- You obviously don't understand the value of the effort being undertaken by 10 Books a Home (a tremendous undertaken, IMHO).

Having spent time during my school days teaching reading to immigrants, I probably have an equal understanding of anyone else trying to teach reading. I also have spent quite a few months teaching English to young people in a foreign country using Instant Messenger, email, and Skype. Gave me quite an insight into the differences between spoken English and written English. Also demonstrated that languages could be taught on-line. But what about yourself--have you ever taken any time to teach anyone anything?

Report Objectionable Content
Email Town Square Moderator
2 people like this
Posted by Stop the Trolls
a resident of Mountain View
on Nov 29, 2014 at 5:01 pm

@Wondering?: "But what about yourself--have you ever taken any time to teach anyone anything?"

As a matter of fact, I have taught at the college level. And I have found that face-to-face interactions, both in individual and group settings, work much better to convey a point -- and to facilitate discussion -- that technology would alone.


Report Objectionable Content
Email Town Square Moderator
10 people like this
Posted by pointless points for $200 alex
a resident of Barron Park
on Nov 29, 2014 at 11:14 pm

@Stop the trolls and @Wondering,

Now that we have taken out our rulers and measured whose is bigger. Rather than debate over what is the better learning tool (physical tangible books vrs. e-books) - I would have to say that it's mostly about the time spent with these children in a motivating supportive environment. The bookcase and the books serve as a reminder of that support and a symbol of the libraries or future classrooms that the children will be in. The child becomes comfortable around these resources and learns to like them and appreciate their importance. The parents can go to the bookshelf, take the book from the shelf, and read it with their child. These are simply building blocks... there is plenty of time later for ipad e-learning.

Report Objectionable Content
Email Town Square Moderator
5 people like this
Posted by Stop the Trolls
a resident of Mountain View
on Nov 30, 2014 at 10:25 am

@pointless points: THANK YOU. That was the point I was hoping to convey -- simply parking an iPad in front of a child is not the same as engaging a child face-to-face with a book.

Report Objectionable Content
Email Town Square Moderator
8 people like this
Posted by EPAMom
a resident of East Palo Alto
on Nov 30, 2014 at 5:47 pm

What a wonderful program! It doesn't take a lot of funding, involves and respects the family involvement and setting, and provides that essential personal contact which yields benefits to all parties. This is far superior to having the child sit in front of a screen. So glad this program exists.

Report Objectionable Content
Email Town Square Moderator
8 people like this
Posted by Wha?
a resident of Another Palo Alto neighborhood
on Dec 2, 2014 at 10:41 am

Meeting face to face makes a huge difference. There is a reason companies still pay for people to fly to meetings, and that is because we communicate differently face to face.
Personal contact and showing enthusiasm is what kids feed off of, and this program makes each child feel special. Perhaps the person who suggested giving them a device is the person who regularly says get rid of libraries and give each resident an eBook reader instead. One doesn't replace the other. It isn't the same experience.
One of the stories talks about the boy making name tags, using writing skills and feeling as if they contributed. That doesn't happen with Skype, tablets or computers.
What a great article about a great program!

Report Objectionable Content
Email Town Square Moderator
6 people like this
Posted by KP
a resident of South of Midtown
on Dec 2, 2014 at 11:50 am

I think it's a great program...and ANYONE should know that face to face time with a child is better than any other type of learning.
Nice job on coming up with a wonderful program for kids, Mr. Thiebaut III!! I applaud you!