The streak goes on for SHP girls with eighth straight title 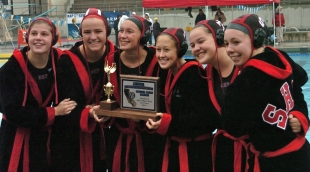 Sacred Heart Prep's senior class got to celebrate with the CCS Division II trophy following a 15-4 victory over No. 2 Soquel on Saturday. Photo by Keith Peters/Palo Alto Online Sports.