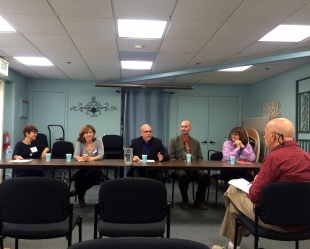 Connections is at JLS, not Jordan. Candidate and or PAOnline should get basic facts straight.

Our two kids suffered through Jordan. It is a hellhole, and I am glad it is finally getting some attention in this election. While a few of the teachers are great, many are abusive, intimidating or simply uncaring.

I agree with the parent's comments on teacher inconsistency. As for the difficulties when a teacher holds all kids up to the standard of the highest kids in class , that is one of many pressure tactics used there. Along with excessive homework, and regular threats of impending failure: "it will only get worse next year" and "if you don't do your (mountain of) homework, you'll fail high school"

Intimidation tactics abound: kept after school for late homework (with no help, no credit), teacher tearing up kids homework in front of the class as 'unacceptable'', and issuing harsh grades to start the semester as a negative start. I could go on.

The entire experience can be summed up as a place where kids are presented material - if they learn first-pass or teach themselves from the book or tutors, then they are sorted higher , if not they are sorted lower.

It is one large disappointment factory more focused on sorting kids than teaching all.

Hopefully these candidates will shine a light on this dark corner of our districts social emotional poor treatment.

I heard about a teacher at Jordan who made boys wear a tutu in the quad for failing math test. Is that true? How is that teacher not terminated? Maybe he/she can co teach with Winston in special ed, which appears to be the dumping ground for sexually harassing teachers.

Report Objectionable Content
Email Town Square Moderator
3 people like this
Posted by Strike 3 on Jordan
a resident of Walter Hays School
on Oct 19, 2014 at 8:12 am

My oldest son also had bad experiences at Jordan. I now understand why so many Walter Hays parents are sending their children to Menlo, Sacred Heart, GMS, Casty, and Priory for middle school. Kudos to the candidates for acknowledging this issue and talking about it. The fact that Dauber, Foster, and Dalma all have children in private middle schools speaks volumes. And that was also true of Melissa Baten Caswell's child, until recently. I agree with Dauber and Godfrey that we need to be looking at what parents are actually doing, and fixing what is broken here.

Report Objectionable Content
Email Town Square Moderator
2 people like this
Posted by Experienced Parent
a resident of Palo Alto High School
on Oct 19, 2014 at 11:29 am

@Et tutu Brutus: Had two children graduate from Jordan within the last 4 years and never heard of such a thing. The last two principals, Milliken and Barnes, would not allow such nonsense. Milliken was the first to crack down hard on bullying.

My children disliked Jordan too. The quality of teachers is weak - There are some good teachers, but overall, disappointing. The English department isn't teaching writing skills - it's the worst department. Plus, kids get weird in middle school. They should do social bonding activities. Lunchtime is like a fishbowl.

David Cohen is a registered user.


I'm disappointed to see comments offering broad, negative generalizations about schools and departments here. I will refrain from such generalizations and stick to personal knowledge, having only worked with a subset of hundreds of students among the thousands who have gone through our middles school in my twelve years at Paly. Actually, let me just say this: the 50+ freshmen in my Paly English classes last year were, overall, very well prepared for high school, as writers, readers, thinkers, technology users, and overall citizens and scholars. I'm grateful to them, their families, their prior teachers and schools. I'm also a highly satisfied middle school parent.

I had 2 kids at Jordan in the past 5 years (both have graduated to Paly). I saw nothing wrong with the school, but quite a lot wrong with parents' view of ages10-13, the tween years. It seemed to me that parents were very hands on in elementary school, and then "took a break" on parenting. Middle school is when the MOST parenting needs to happen. It's when the kids are really forming who they are going to be. If that happens in a positive way, the teen years are a breeze. If it doesn't, you will spend the teen years trying to do damage control. But it's up to the parents individually, not the school.

I'd like to add my comment to the list of those who are very happy with our schools. I have children at Terman and Nixon and both are excellent schools with a caring and supportive environment. I was worried about the middle school experience, but it has turned out to be a great one for my daughter. The teachers, principal and staff at Terman are all outstanding!

Flying: How much is enough? It's personal.
By Sherry Listgarten | 8 comments | 2,009 views