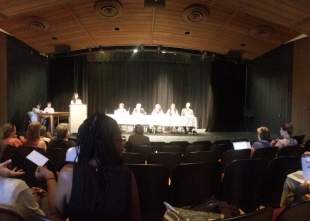 The five Palo Alto school board candidates gathered at Gunn High School on Sunday, Oct. 5, to discuss the issues affecting the district's nearly 4,000 high school students, including mental health, college readiness and the differences in culture at the district's two high schools. Photo by Elena Kadvany.

I am disappointed that there was no questions asked pertaining to the size of our middle and high schools and what the candidates feel about allowing these schools to grow bigger.

I feel that the size of our schools is one of the biggest problems that will face PAUSD over the next 3 - 5 years.

2 people like this
Posted by Parent
a resident of Another Palo Alto neighborhood
on Oct 7, 2014 at 6:34 pm

As a longtime active parent in this district, I can tell you that often, parents only get loud because they have to, and depending on the issue, the district still doesn't listen that well.

I'd really like to have a way for reason, data, and information to give me a voice, and if the echo chamber and political winds at the top drown it out, I want the board to provide ways for parents to be heard when the issue is important enough. Local control vested in school boards is supposed to be about vesting that power in district FAMILIES.

I would really like to know how board candidates intend to give families and children a greater voice, and tangible ways they intend to create an environment that is more conducive to collaboration rather than the top-down authoritarian model we have now.

[Portion removed] [M]ost of what the district complains about it could look in the mirror and see ten-fold the problems between itself and parents, and if it did that kind of self-examination with a spirit to improve service to families, those issues between itself and OCR would go away. The amount of resources spent on navel-gazing umbrage rather than self-reflection and correction to meet its mission of serving families and children takes my breath away.

Has anyone asked - did the district ever speak with the parents who filed the complaints and try to examine how it could have avoided the OCR complaints that resulted in the resolution agreements? (I mean with a spirit of trying to find out, even apologize where it erred, because we all know the parents in each of the cases tried for many months to communicate with the district at different levels.) Did the district ever examine the negative impacts on the families of the districts failures and unprofessional practices? Did the district ever examine its own processes for producing documentation and think about how to streamline them, or examine how they have failed families in ways that have negatively impacted students? Or did they just assume that if no one forced them to examine those things in court, everything is just great and the only thing in need of redress is injured egos in an insular administration?

It would be one thing if the district had examined itself for the very same complaints it makes to OCR, but it hasn't. And if it put just a fraction of that effort into working with families and improving its own practices, it really wouldn't have to deal with OCR.

Like this comment
Posted by Parent
a resident of Another Palo Alto neighborhood
on Oct 7, 2014 at 6:37 pm

@ Paly Parent,
"I am disappointed that there was no questions asked pertaining to the size of our middle and high schools and what the candidates feel about allowing these schools to grow bigger.

I feel that the size of our schools is one of the biggest problems that will face PAUSD over the next 3 - 5 years."

Where were you when parents were protesting the Measure A plans to enlarge the existing schools rather than improving them at their current size and reopening Cubberly? We had the money and the mandate to do that, and now we will need another bond measure.

I have been concerned about this subject since my kids were in elementary school and have been voicing these concerns. As to where I was, I would mention that I sat on a committee discussing boundaries and the board took no action.

@Paly Parent,
My apologies. I shouldn't make you responsible for the poor way the district handled the issues. I just felt very alone on the Cubberly issue.

Becky Sanders is a registered user.


Here is a link to the video of this Debate. A Media Center volunteer covered this on behalf of the Palo Alto PTA Council.

Thank you for spreading the word.

JLS mom of 2 is a registered user.

Flying: How much is enough? It's personal.
By Sherry Listgarten | 8 comments | 2,008 views