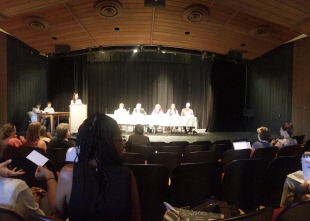 The five Palo Alto school board candidates gathered at Gunn High School on Sunday, Oct. 5, to discuss the issues affecting the district's nearly 4,000 high school students, including mental health, college readiness and the differences in culture at the district's two high schools. Photo by Elena Kadvany.

4 people like this
Posted by The Silent Majority
a resident of Another Palo Alto neighborhood
on Oct 5, 2014 at 11:46 pm

I attended todayâ€™s debate. I thought all five candidates acquitted themselves very well. Frankly, I think we would be well served to have any of them serve on the school board. In the spirit of matching their positive comments during todayâ€™s debate, letâ€™s see if everyone can refrain from negative comments on this thread. If you have something positive to say, by all means say it. If you have something negative to say, keep it to yourself.

Thanks â€“ on behalf of the overwhelming majority of Palo Alto residents who would like to see forums like this provide an opportunity for a positive discourse on matters of community interest.

Like this comment
Posted by The Silent Majority
a resident of Another Palo Alto neighborhood
on Oct 6, 2014 at 12:49 am

Report Objectionable Content
Email Town Square Moderator
2 people like this
Posted by Truthseeker
a resident of Duveneck/St. Francis
on Oct 6, 2014 at 1:16 am

Truthseeker is a registered user.


An article and a forum about the school board race not dominated by the OCR resolution? I am impressed! Now we can actually focus on the other issues that affect education in our district and must be considered when we choose our representatives on the PAUSD BoE. I did not attend this forum, so I would like to respond to the Weekly's summary of it.

- Inconsistency across our schools: Yes, we recognize it is a problem, as do the candidates. Wow, to enforce a common homework policy, and a common grading standard across high school English classes! That is a parent's Shangri-La. I agree with the candidates that surveys are worthless if you don't act on the results. Students more than anyone feel that their voices are ignored.

However, I would like candidates to consider the following. Autonomy is valued by teachers, and choice is valued by parents. Also, we can talk about collaboration and sharing of best practices until we turn blue. They teach that in Ed School. However, as my spouse (a public school math teacher) complains, too many tenured, veteran teachers want to keep the best things to themselves, and I would like to see any Board or administration change that culture. This is human reality. When we talk about Common Core, people can praise it to death, but the bottom line is, nobody has a clue how to implement it consistently. There is no template or formula for success, and some of the things they are telling the math teachers to do is silly. They will have to figure it out as they go along. [Portion removed.] Let the Monets and Van Goghs do things in their own creative ways, but make sure all of our kids come out prepared for the next stage in life. [Portion removed.] [T]here needs to be a line from the Board to the administration to the teachers: the Board needs to define what those outcomes must be, based on the broader, national conversation on educational achievement, and provide the tools to get to those outcomes.

- Quality of services: I agree that there must be equality and equal access for all. I think to say that Gunn's counseling services have been brought up to Paly's standards is not saying much, since Paly's standards have been seriously wanting for a long time. Seems we are satisfied with sub-par quality. I hope the Board takes a fresh look at what constitutes effective counseling in education, and implements change.

- Courage: Three of the five candidates have been expressing anger towards the current Board throughout this campaign. Like many in the district, they are fed up with lack of transparency, loss of trust, and an apparent move away from involving the community in decision-making. Most of their feelings are justified. However, I would like to hear fewer complaints and more solutions about moving forward. The current board is unpopular. How will these candidates govern, once elected to this Board minus Tom and Mitchell? That is what I will be thinking about when I mark my absentee ballot. [Portion removed.]

- Innovation: If we want to talk the talk, we need to walk the walk. This is an area of strength for candidates who have exposure to what is happening in the larger world of education beyond Palo Alto's pearly gates. [Portion removed.] My feedback to all of them is this: stop limiting comparisons and studies to "like" districts, i.e., wealthy with similar demographics. Much of PAUSD's success has to do with the parental factor and our demographics, not because of the quality of teaching in our schools. We need to get off our high-horses and see what others are doing that we are not. We need to help those who do not have access to highly educated and available parents and/or tutoring services at home.

Finally, since we are talking specifically about Board of Education candidates, and not the Superintendent or teachers, I think we should think about what makes a good board. I encourage readers to look at the following CPE research article about the traits of an effective school board.
Web Link

Report Objectionable Content
Email Town Square Moderator
Like this comment
Posted by fact check, please
a resident of Another Palo Alto neighborhood
on Oct 6, 2014 at 5:59 am

Report Objectionable Content
Email Town Square Moderator
1 person likes this
Posted by Observer
a resident of South of Midtown
on Oct 6, 2014 at 6:05 am

Report Objectionable Content
Email Town Square Moderator
Like this comment
Posted by fact check, please
a resident of Another Palo Alto neighborhood
on Oct 6, 2014 at 7:42 am

Report Objectionable Content
Email Town Square Moderator
2 people like this
Posted by New in Town
a resident of Palo Verde
on Oct 6, 2014 at 1:17 pm

New in Town is a registered user.


Just echoing something said by Truthseeker above:

"Much of PAUSD's success has to do with the parental factor and our demographics, not because of the quality of teaching in our schools. We need to get off our high-horses and see what others are doing that we are not. We need to help those who do not have access to highly educated and available parents and/or tutoring services at home."

It is important to refrain from resting on past laurels, prepped test scores, and acceptances for students from families who outsource the whole process and to make sure there is focus on the effectiveness of IN-CLASS instruction, especially across students with different learning styles.

How much of today's reputation is due to PAUSD vs. paid consultants?

Report Objectionable Content
Email Town Square Moderator
2 people like this
Posted by TJ from Midtown
a resident of Midtown
on Oct 6, 2014 at 3:28 pm

TJ from Midtown is a registered user.


I also attended the debate and was very pleasantly surprised by the discussion. But I certainly also echo the above comment that so much of PAUSD's success is due to the parents!

I wish the community would stop whining a bit and focus on what the candidates have done already and what they say they will do!

Flying: How much is enough? It's personal.
By Sherry Listgarten | 8 comments | 2,007 views