Five vie for two seats on Board of Education 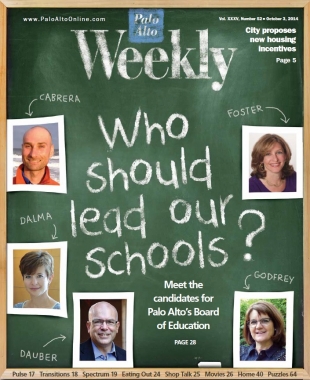 This is so perfect! Nearly as good as the endorsements last time.

1 person likes this
Posted by A Parent
a resident of Another Palo Alto neighborhood
on Oct 3, 2014 at 11:48 am

Thanks for the analysis. One thing stood out for me: Jay Cabrera "is a strong advocate for using technology to enable greater community participation in district decision-making."

While I don't think Cabrera can win and I'm not voting for him, frankly, I do want to urge him to be involved past the board election in this very important issue. School boards exist for local control, but there seems to be even less accountability to all parents in this district than of City Hall to the citizenry (there at least, as we have seen, a referendum can turn the ship). I hope Mr. Cabrera will continue to be involved, as Mr. Dauber has been, especially on this issue he is quoted above as supporting, it's a way of bringing our district into the 21st Century.

I completely concur about everything said about Dauber. So far, Dalma has been the one who has impressed me the most - in an environment where we need people who are unencumbered by existing ties and politics, as this editorial espouses, she seems to be the one most unafraid of acting based on rational decisionmaking. (No, I do not know her personally.)

1 person likes this
Posted by Resident
a resident of Another Palo Alto neighborhood
on Oct 3, 2014 at 2:20 pm

I think what is important for me is that we have a board with varied make up. We have had very similar types of people on the board, all good people, all worked through PTA, but none of them have really stood apart from any of the others. For balance this time I think it is extremely important to get a varied group of people. I like the idea of a teacher, someone who sees things from teaching would be a different perspective. I think we are beyond the cookie cutter, carbon copy year after year board.

Too many of the candidates sound very similar to what we already have. I am hoping that we can get some new perspectives and new methods of action here. Intelligent and change is what I want for our new board members.

Report Objectionable Content
Email Town Square Moderator
2 people like this
Posted by Briones Parent
a resident of Juana Briones School
on Oct 4, 2014 at 12:40 am

Flying: How much is enough? It's personal.
By Sherry Listgarten | 8 comments | 2,008 views