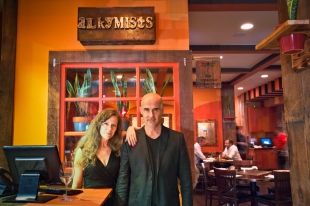 Thierry Fassiotti, right, manager of alkymists restaurant, is passionate about supporting women. He stands with hostess Bryn Carmassi at the restaurant's soft opening on Sept. 18, 2014. Photo by Natalia Nazarova.

Is this a restaurant to feed and help the homeless? I'm not sure if others are welcome by reading this article.

To DJ: This is a full scale restaurant completely open to the public. If you go in to eat and drink, there is no sign that there is such an incredible project in the works, other than the warmth of the atmosphere and passion of the employees and owners. I believe the effort to educate the less fortunate is something that will take place completely off-hours and does not interfere with normal operation of the restaurant. However, the owners would have to validate that statement. I just go in to eat and drink :)

I went to their web site and looked all over for prices. Not a clue.

'Are they ready for fully innovative Indian food?' Ettan arrives in Palo Alto with chaat, caviar and a secret menu
By Elena Kadvany | 0 comments | 3,500 views

Flying: How to lower your impact
By Sherry Listgarten | 10 comments | 2,422 views