Cluck, cluck! It's time for the Tour de Coop 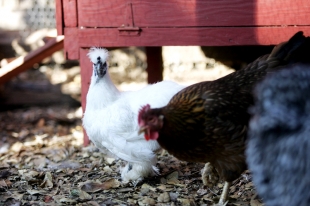 Among the hens in the Little Red Hen House on this year's Tour de Coop are a While Silkie, left, and a Rhode Island Red. Photo by Ciera Pasturel.

Associate Editor Carol Blitzer can be emailed at cblitzer@paweekly.com.

Flying: How to lower your impact
By Sherry Listgarten | 10 comments | 2,416 views