Key ingredient for opening a restaurant in Palo Alto? Patience. 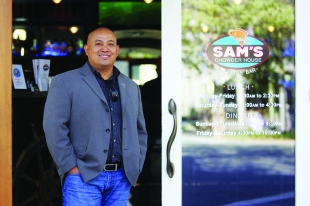 Henry Rafael, a project planner with the City of Palo Alto, stands in front of Sam's Chowder House in downtown Palo Alto, which opened last November after going through the city's permit process. Photo by Ciera Pasturel.

This process would be absurd at a tenth the cost and time.

Guess he will now have to have a couple more people to manage those managers, and to focus on "streamling the process" more than the last two have been able to do.

Wonder how long 27 University would have taken to get its permits/approvals if the story had not broken the way that it did?

Or maybe .. we should consider getting a City Manager who actually works for everyone--not just the favored few who are able to gain access to this almost invisible man.

We have opened two restaurants in downtown Palo Alto, and we have experienced a process that is reasonable in both method and time. I often hear stories of people lamenting all they need to do to get up an running, but what they do not understand is that restaurants by nature have more process/regulations/rules than many other types of businesses because of public safety. It is my impression that 90% of the people opening restaurants do not have experience in the industry and trip and fall along the way, costing money and failure. That is not the City's fault.

> That is not the City's fault.

That really depends on how difficult the process is, how well documented it is, whether there are sufficient staff available when the project is going through the process, and the personality of those on the City-side who are dealing with the applicant.

And then there is the issue of how different are things in Palo Alto from Mountain View and Menlo Park?

Clearly the process has been found wanting .. as the City Manager hired new managers a year, or two, ago. There has never been a really good public airing of the process to get a project through City Hall, so maybe it's time for the City Auditor to look at what's going on from both the City-side and the Client-side.

Report Objectionable Content
Email Town Square Moderator
5 people like this
Posted by Time is of the Essence
a resident of Barron Park
on Jul 6, 2015 at 4:31 pm

If time is money, patience will bankrupt a restaurateur.