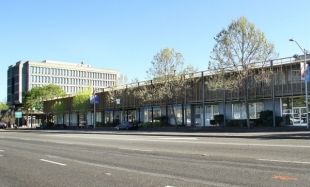 El Camino Real property owners have been skeptical and critical of the city's revised proposal to eliminate a "build-to line" requirement along the busy thoroughfare. Photo by Veronica Weber.

After faltering in their first effort to promote wider sidewalks on El Camino Real, Palo Alto officials did little better Wednesday with a far more modest proposal, which was greeted with a wave of confusion and criticism by property owners.

Unlike the plan that the City Council rejected on June 2, the proposed ordinance discussed by the Planning and Transportation Commission does not set new requirements for sidewalk width on El Camino or other thoroughfares. Rather, the change would remove an existing rule that new buildings on major arteries be placed close to the street to create continuous walls and give the street what planners call an "urban edge."

On El Camino, at least 50 percent of a new building's frontage currently must extend up to the setback line, typically 10 feet away from the road.

The benefit of having the "build-to line" requirement is that it reduces the street's "missing teeth" look, in which some buildings press up against the road and others are set back in strip-mall fashion. The downside, as local residents have complained, is that the requirement creates a "fortress" look as exemplified by large buildings like 801 Alma St., the Arbor Real townhouses on El Camino at Charleston Road, and the Alma Village development, whose supermarket appears to turn its back to Alma Street.

In focusing exclusively on the build-to line, the proposed ordinance was far less ambitious than the prior effort. But even this low-hanging fruit proved difficult to pluck Wednesday night, with several property owners saying that the change is confusing and unnecessary. Some scoffed at the city's continued reference to the Grand Boulevard Initiative, a regional plan for turning El Camino into a more pedestrian-friendly thoroughfare. With so much opposition in the air, the planning commission agreed to delay its vote on the rule change until a later meeting.

In proposing the change, city planners at Wednesday's meeting stressed that, unlike the prior proposal, this one actually gives property owners more flexibility by eliminating a requirement that many now see as counter-productive. Under the proposal, the build-to-line rule would be abolished at all thoroughfares except El Camino Real. It would also change rules on El Camino so that setbacks are evaluated based on context rather than by a rigid requirement.

Even so, property owners questioned the need for the rule change and wondered about its practical impacts. Andrew Pierce, an attorney representing 14 property owners on El Camino, said basing setbacks on "context" would confuse things because it would leave the actual requirement to the discretion of the city's review boards.

"What that means in practical terms is no one will know what setback is legal until they come to you and other commissions," Pierce said.

Property owners, he said, "don't think it's necessary to expand authority over private property on El Camino as part of reforming the build-to line."

"We are opposed to anything that will effectively increase sidewalks on El Camino beyond the existing 12 feet, which we also believe is unconstitutional," Pierce said, referring to the 12-foot requirement for sidewalk width that was created in 2005.

Others said they didn't know what the city is trying to achieve. Simon Cintz, whose family owns two El Camino parcels, questioned why the city is eliminating the build-to line in other areas but not on El Camino

"I still don't really understand what makes El Camino so special that you have this build-to line -- modified, granted, but still there," Cintz said, observing that El Camino is "not Champs-Elysee."

Tracy May, who owns a property on the 2000 block of El Camino, framed her opposition in more dramatic terms and suggested that the city would have benefited from more outreach with property owners.

"I don't think it's fair to take property without even calling or getting ahold of the people you're taking from," she later added. "That's what happened in our case."

The reaction from property owners befuddled city officials, who repeatedly maintained that the intent of the ordinance is to make development easier rather than harder. Planning Commissioner Greg Tanaka said he was surprised by the reaction and suggested that property owners may have "missed the point" of what the city is trying to do. Commissioner Eric Rosenblum pointed to the "large gap between members of the public and what's been developed" and cited a "dissonance." Planning Director Hillary Gitelman, meanwhile, deflected accusation from Pierce and others that the proposed law constitutes a "taking" of private land by the city.

"For those concerned that we're doing something to make development more difficult, this ordinance would actually do the opposite," Gitelman said Wednesday. "The intention of the ordinance is not to change the setbacks, it's to relieve property owners of the build-to-line requirement on most streets it applies to and to loosen the onerous requirements on El Camino," Gitelman said.

In addition to staff's proposal, the commission also considered an alternative pitched by Vice Chair Arthur Keller: eliminating the build-to line on all thoroughfares, including El Camino, and simply specifying that developers can't use El Camino frontage for parking. This, he said, would effectively keep new developments from having the appearance of strip malls without requiring a continuous stretch of building walls along the street. Keller also noted that in most cases developers already have an economic incentive to build closer to the street. In cases where they choose to set back further, it would be to add outdoor seating or landscape elements.

"I think that economics now and in the future will essentially mean that people will not set their buildings back too far because they want to maximize the use of their properties," Keller said.

While Keller's proposal earned the support of Commissioner Carl King and some interest from Rosenblum, members agreed that more time is needed to consider its implications, including unintended consequences. But while Rosenblum lauded Keller's idea for its simplicity, he also said he was "very suspicious" of completely eliminating build-to lines.

"I think the notion of encouraging new developments to meet the street is an important objective," Alcheck said, noting that there is a reason why people refer to "missing teeth" on El Camino. "When someone's missing teeth, it's unsightly."

He was more receptive to staff's initial proposal, though he ultimately argued in favor of more study before any action is taken.

El Camino through Palo Alto is getting mighty crowded with all the new construction right up to the street. Wider setbacks are indeed attractive and reduce the "driving through a slot" feeling. I don't know who came up with the "missing teeth" analogy but staggered setbacks alleviate the crowded feeling and can be made very attractive.

I lump this in with the unnecessary and possibly illegal noise ordinance at Lytton Plaza in that it looks like someone powerful led staff to lead commission towards messing with what is probably best left alone. It's very hard to believe anything at face value coming out of 250 Hamilton. It will be interesting how we officially respond to the Grand Jury Report of June 16, 2014.

What else could we or would we be doing, as a community, as a civilization, if we weren't under constant pressure to appease not the squeakiest wheel but this irresistible grinder of purported progress. What is the will of the people? Anybody out there?

There is a lungfish somewhere wishing he had never jumped out of the water.

"missing teeth" - How stupid is that?!! It's called character and individuality. NOT a huge wall we drive through. It's so nice to drive in downtown Mtn View.
You have such a variety to see. Southbound on Alma after leaving downtown and excluding the Meadow Jailtown, it's a beautiful drive. El Camino heading North after S. PA all the way to the City is so beautiful.
Why do these council people in PA feel we need to look like a "hurry and drive through it" and not a "welcome to our town, stop and shop"?!!?
Listen when you hear something that makes sense...Keller was making sense! Geeez!

The requirement for buildings to come out to the sidewalk only makes sense if most traffic arrives by foot and the main entrance is in front. In reality, most of El Camino and Alma patrons arrive by car and the main entrance then naturally opens to the back or side. This is the reason why we end up with these ugly fortress-like buildings that offer nothing for the street front.

What comes across in the article is that the property owners are upset that the "helpful" change forces them to have to endure the Palo Alto process of ad hoc reviews, which become dependent on personal preferences within the department and the commissions, and not on a standard methodology and set of requirements. That the Planning Department doesn't realize how much any sane person would want to be as far removed from it as possible is not surprising.

A Pragmatic Approach to A Trillion Trees
By Sherry Listgarten | 2 comments | 3,455 views

Repairing a Disagreement with your Beloved & “Physical” vs. “Social” Distancing
By Chandrama Anderson | 1 comment | 2,212 views