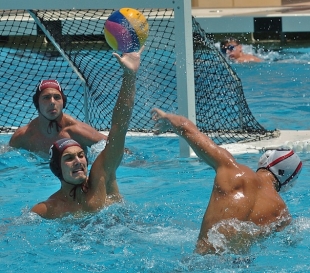 Michael Swart of the Stanford 18U A team was busy on defense while protecting goalie John Wilson during a 13-8 loss to LA Premier on Monday. Photo by Keith Peters/Palo Alto Online Sports

Meanwhile, the Mid Peninsula Water Polo Club, consisting of Menlo-Atherton players and coached By Giovanni Napolitano, has advanced to the third place game in the 16U Classic Division after losing to top seeded Irvine Kahuna Black Tuesday morning 11-10. Mid-Pen entered the tourney as the #14 seed. The team has seen balanced scoring coming from Mostyn Fero, Christian Huhn, Alex Halanson, Jack Beasley, Jorge Pont, Spencer Gran and James Calhoun. The defense has been anchored by Jackson Goudey in the goal.
The third palce game will take place at 2:00 Tuesday at Hillsdale High.

Boys 16u mid-pen coaches are a joke and embarrassing to the sport of waterpolo. They should not be allowed to coach and I wouldn't want my kids or community represented by them

The only thing offensive here is these anonymous mean spirited comments. Who are you? Obviously no Italians in your families. These coaches are very kind and positive with the boys. Both Gio and Bruno are passionate former professional water polo players from Italy. We parents are educating them and helping them understand the conservatism of american sports and age group behavior. To slam them anonymously like this shows no class. These coaches took a bunch of raggedy public school kids and whipped them into a team that could compete with very good teams from SoCal. Not a lot of teams from NorCal can do that. I'm guessing these parents are from rival private schools that don't like the idea of a public school based team competing with them in their clean and tidy elite sport, which as far as I can tell has been engineered so that only private schools can be successful in CCS. I have been an age group coach for 17 years and I'm a huge proponent of the work of PCA. We will get our coached acculturated into the US way of age group coaching, but I feel the biggest objections here are with our passion and success, not any particular behavior. Call me and we will have a cup of coffee at a discussion. But don't be an anonymous troll.

Polo Dad, I totally understand why you want to be anonymous but when you accuse some one to be "a joke and embarrassing to the sport of waterpolo" you should be more specific.
But if you want I can explain to you why with Giovanni M-A (a PUBLIC SCHOOL) went 2 times in a row to the CCS final and why MID-PEN was the only northern team in the top 4rh 16U Classic Div.

Thanks
Bruno (THE JOKE)


The referees have the tools to tamp down bad behavior by coaches. If the coaches deserved it, then they would receive a yellow card or a red card. Did any of the coaches get carded?

I'd love to watch some of these water polo players try and earn a J/O medal...

Crescent Park Dad- yes the coaches did receive red cards and didn't leave the area in a reasonable amount of time. Great role models and embarrassing for the kids. For the parents who condone these actions I ask you if you would want you son coaching in ten to twelve years, would you want them to act this way? Who are their coaching role models. You have the answer. I am from a public school and have no doubt these guys are passionate and have the skills to help the kids improve but the definition of a coach says something about being a positive role model under the most stressful and intense moments. These "coaches" lose their control and it is bad. Why when the coach was red carded the last game all parents, even some from mid-pen parents where applauding? Enough is enough. You can be passionate and a great teacher without losing control. Mike yes there are Italians in the family but they win and lose with class and dignity unlike what I saw at JOs. If you wish to have your kids around that I feel sorry for you. Has it really come down to that? Bruno- I could identify myself but you wouldn't like the outcome. Just win and lose with class without losing control, cussing at the kids, yelling at the refs or other parents, and represent yourself, your team and the parents who pay you in a dignified manner. Pretty easy thing to do no matter what country your from

Of course I don't condone any red card behavior. [Portion removed.] If you watched any water polo at all last weekend, you would have seen any number of yellow and red cards issued, I saw one last night against a girls coach who kicked a peice of equipment. I do not excuse red card behavior, but I know it sometimes happens and the refs know how to deal with it.

As I mentioned, we are helping our coaches be better coaches and our fans be better fans, no one was applauding bad behavior or throwing chairs in the pool. Spreading misinformation anonymously shows a lack of character as well since you tar everyone with the same brush.

I apologize for my private/public school comments. That was not called for, there are a great folks at public/private schools everywhere and the CCS rules are what they are. As a public school parent I need to get that chip off my shoulder... It's not productive. Again, my apologies.

PD, try approaching the parents and coaches openly and registering your concerns. Believe me, our coaches have already gotten an earful from us parents. But we know them and know they are kind and passionate and understand the sport at the highest level and have the best interest of the kids at heart. We are nice people trying to do our best to grow this sport. Again, let's get in touch and discuss... We can have a coffee at Cafe Barone :-)

Gio is passionate for the game. And he comes from a background where water polo was the way to get ahead in life. He and his brother have amazing resumes from Sicily and the Italian National Team. However his temper and his inability to evolve/adapt to the sportsmanship norms of this area have hurt in the past and apparently in the present. I hope that his current parent group can provide the guidance and influence to get him over the hump. He continues to be involved in the sport for the right reasons.

Pollo Dad, the outcome will not be good for you or for Giovanni? I do know Giovanni well and he will still eat and sleep even if you are Obama trying to get him fire from M-A. The reality is Giovanni is the best coach this area could ever get. In Italy we used call him "The BOOK". He knows WP from A to Z and that's why he won 5 times 12U Italian championship. 4 of those kids played at the Olympic and Italian National team. Crescent Park Dad, when you are talking about sportsmanship are you talking about him yelling the right rules to the refs? Because I saw this week a lot of USA refs and they didn't even know what a ball under is. I even saw one "International" ref from Palo Alto that refs NCAA calling 5MT close to the deck of the pool. I would not call it non-sportsmanship but frustration of dealing with incompetent.

I cannot and would not comment on events that I did not witness myself. I only speak of personal observations and experience. Please re-read my entry and recognize that I would like to see Gio succeed, not fail.

BTW, there is only one International & NCAA referee who lives in Palo Alto (he was assistant to Gio at Paly) and he is not reffing JOs. You must be referring to someone else or someone gave you the wrong information about the referee who made the bad 5 meter call.

My advice would have the coach speak to the JO referee supervisor at the pool site. Much better than getting a red card and then getting a suspension.

Crescent, I think we are talking about the same person. He didn't ref us at JOs but in other tournament. And Gio wasn't there.
Again, I'm not going to write my WP resume or Gio resume, but I can from my WP experience I can say that Gio doesn't need lessons on how to coach or neither how to treat the kids. All Gio's old players I talk have only great words about him and how they became men with him.

Hi Bruno. No, I'm sorry but you are wrong about the ref. He has not reffed any games all summer - since women's NCAA championships in May. And he hasn't officiated USAWP age group games in many years. It has to be someone else.