Carter moves on; Cuffe runs fourth in 5,000 at USATF meet 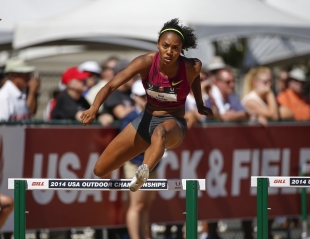 Stanford product Kori Carter won her heat of the 400 hurdles Friday at the USA Outdoor Track and Field Championships in Sacramento. Photo by Spencer Allen/SportsImageWire.com

Flying: How to lower your impact
By Sherry Listgarten | 7 comments | 1,777 views