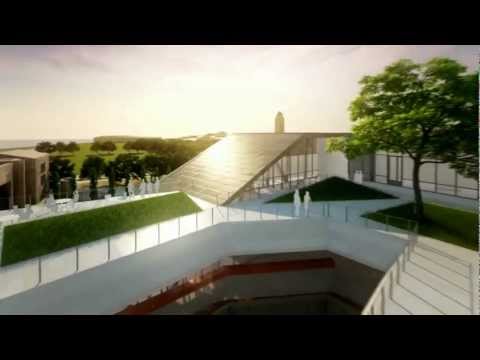 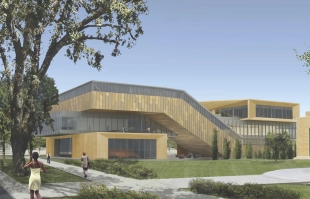 A rendering of the exterior of the McMurtry Building, currently under construction at Stanford.

Construction of the McMurtry Building -- one of three recent projects aimed at creating an "arts district" on the Stanford campus -- is well underway and poised to be completed on schedule, and, according to the head of the university's arts programs, the new facility is eagerly anticipated.

"It's going to incredible," said Matthew Tiews, executive director of arts programs at Stanford. "We're all very excited about it."

The new building -- named for Stanford alumni and philanthropists Deedee and Burt McMurtry, who contributed $30 million toward the facility's construction -- is "going to be an incredible resource for the department and the campus," Tiews said. But more than that, the facility's design is exciting in its own right.

Designed by Diller Scofidio + Renfro and Boora Architects, the building features 96,000 square feet of indoor space, as well as 24,000 square feet of courtyards, where students will cross paths, "meet, mix and connect." The building also brings together many departments that were once dispersed around the campus. Two overlapping, L-shaped wings unite the art history and various other art departments in a single building that encourages interaction, but also gives the various disciplines their own specialized spaces.

It is a design aesthetic that has been championed by such high-tech companies as Pixar, whose co-founder, Steve Jobs, recommended that all bathrooms be centralized in the animation company's Emeryville headquarters, so that employees from all different sectors of the company would cross paths on a regular basis.

One wing houses the entire art history department; the other will provide space for painters, documentarians, woodworkers and other artists to create. The two wings each feature classrooms and lecture halls, and are linked by a shared library. On the ground floor of the facility, a large lecture hall can be converted into an indoor/outdoor performance space with "the push of a button," which opens up the hall's outdoors-facing glass-paneled wall that folds up like a huge garage door.

"One of the things that I really love about this building is that it's designed in a way that showcases both art making and art studying," Tiews said.

It's important that art be showcased, Tiews explained, because the university has recently doubled down on the arts -- emphasizing creativity as being "central" to a 21st-century university education. This past year was the first year that all Stanford undergraduates were required to take at least one course that involved some kind of creative or artistic expression.

This belief is what inspired Stanford to move forward with plans to create an "arts district" back in 2006, he said. When completed in 2015, the McMurtry building will join the Cantor Center for Visual Arts, Bing Concert Hall and the Anderson Collection in forming an artistic hub at Stanford -- a center for creativity open to Stanford students and faculty, as well as those who come to the campus from the surrounding community.

Can you stay healthy without making more trash?
By Sherry Listgarten | 7 comments | 3,339 views