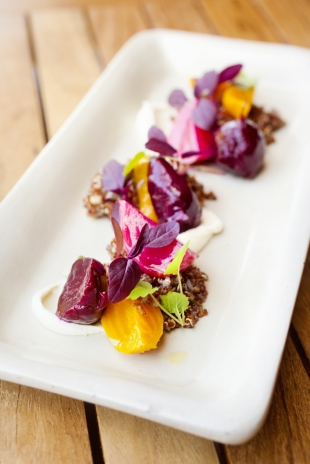 The food was mighty impressive. Bold, expressive flavors without the mask of over saucing, over cheesing, or overcooking. Textures and flavors were beautifully balanced, ingredients spoke for themselves.

Executive Chef Patrick Kelley previously cooked at Mediterranean-themed Gitane in San Francisco and French-inspired Angele in Napa. Lure + Till is all-American, though, with nods to European technique.

My visits didn't start off well. On a gorgeous evening, having made an advance reservation, we were ushered to a back corner table. We didn't merit one of the patio seats that line the Hamilton Avenue side of Lure + Till, the snazzy restaurant tucked into the side of the newish Epiphany Hotel.

Understandably, someone has to occupy those seats when the restaurant is busy. Nonetheless, the younger couple that walked in ahead of us had no reservation but were seated on the lovely indoor/outdoor patio. On this visit we were cornered by tables of booming baritone young men who were enjoying themselves.

Sporadic roar after crackling bellow, the restaurant was loud. We couldn't make head nor tail out of what the waiter said. Nor he, us. We ordered the quail salad and were delivered the kale salad. When he poured the wine for me to taste, I noticed that the glass was filthy. He brought another but failed to take away the soiled one until the entrees arrived. He also forgot his corkscrew on the table. Little things perhaps, but I expected better attention to detail in this upscale operation.

The interior of the 80-seat restaurant and bar is simplicity chic. There are floor to ceiling windows that open to form the half-in, half-out patio, a sleek but fully stocked bar, bare-topped tables, and artistic wood and metal elements. The corner where I was seated was so dark I had to hold the menu shoulder high to gather enough light to read.

For appetizers, the flatbread ($12) was large enough to share. Flatbread was a slight misnomer, as it was thicker than traditional flatbread, something more akin to pita bread. Tasty though and the romesco, fennel and dill, and fire-roasted eggplant spreads were creamy and appetizing.

Another fun starter was the deviled eggs, (three for $5) with chives and shallots, mustard and aioli. The eggs were creamy and soothing with a slight bite to them.

Despite not ordering the dinner-size kale salad ($12), we kept it. The salad was tossed with currents, ricotta salata (moist fresh cheese made from whey with a salty, milky, nutty flavor), toasted almonds and a delicious Banyuls vinaigrette. Banyuls is an aged French savory vinegar.

The actual California quail ($16), secured on a subsequent visit, was worth the protracted wait. The official state bird was crisp and meaty, served with morel mushrooms, asparagus and radish wedges. Don't share this plate.

The restaurant offered three pasta dishes. I tried two. The tagliarini ($14) with hen jus (roasting juices), a slow-cooked egg and turnip was lush and gratifying. The pasta was a vibrant yellow, with the egg bound in the turnip.

The mafalde ($15) was mouthwatering with pancetta bolognese -- a simple dish, perfectly wrought. The pasta was made in-house and nothing beats fresh-made pasta.

Main courses were not disappointing. I went meatless with the most excellent fire-roasted farro risotto ($20) with crispy kale, roasted kohlrabi, sage and egg yolk.

Organic chicken ($23) was compressed white and dark meat with barley, Bloomsdale spinach, fresh peas and a hint of garlic. The chicken was succulent and satisfying. It was a large portion that I couldn't finish.

The $8 desserts were worth saving room for. The gianduja ice cream (chocolate and ground hazelnuts) was served with cajeta caramel (a thickened goat's milk syrup), walnut, brownie, hazelnut and banana rum ice cream.

Carlos Yturria, the bar master, contrived an excellent cocktail menu of refreshing summery mélanges that paired well with the food. The well-conceived wine list was an international affair, a tad on the pricy side, but the wines were a cut above.

After the initial snafus, service was attentive and the staff knowledgeable.

The front of the house still needs fine tuning and I don't know what to suggest about the noise wave that sloshes around the back walls. As for the kitchen, one of the best in the area.

Lure + Till, in the Epiphany Hotel

Like this comment
Posted by resident foodie
a resident of Another Palo Alto neighborhood
on Jun 22, 2014 at 12:46 am

Love that you include bathroom cleanliness!

I'm beginning to think we should start a local website to shame businesses by posting their bathroom photos...

With all the minor things wrong here, and then looking at the plates ... barely half-full of food ... just seems like a status thing to go there and get ripped off ... have fun!

After being dissed at the outset by being dispatched to the loser table, I'd have walked. Perhaps you'd have to -- if you hadn't had a review to write.

Glad we, i.e., those of us who may not be among the BPs, have been warned.

Personally, I think the bathroom warning is enough to put anyone off, no matter how great the food.

Other than that, I think a person might want to it a month, maybe the restaurateurs will read this review, and clean up their act.

After all, in SillyConniving Valley, any slouch in dirty sweats could be a billionaire!

So, where in the article was the bathroom warning? I was surprised to have missed it, re-read the article and still didn't see it. Was it only in the printed version?

Sparty is a registered user.


"So, where in the article was the bathroom warning? "

at the end of the review

To the snooty employees at Front of the House:
Someday YOU will be old...or even middle-aged. Apparently you want some "eye candy" of young neuvo-riche pseudo Hollywood seated at your front in view of passers-by.
I would have walked at the discourtesy and unprofessionalism shown by the person(s) doing the seating that day...
And yes - remember that David Packard drove a regular type car, so don't go only by shallow appearances as to extent of power or wealth.

These local restaurants are donating meals to Bay Area residents in need. Here's how to help.
By Elena Kadvany | 6 comments | 11,514 views

Coronavirus: Plan ahead now for a big outbreak
By Diana Diamond | 20 comments | 4,399 views

Will the Coronavirus Save Lives?
By Sherry Listgarten | 29 comments | 4,061 views

The first few seconds after awakening; before I remember the virus
By Chandrama Anderson | 0 comments | 1,246 views