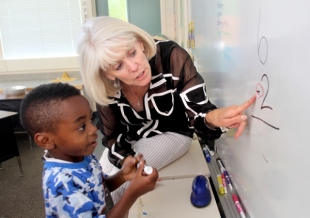 Gayl Giannik, a teacher with the Morrissey-Compton Educational Center, explains to incoming first-grader Daniel Houston how to add and subtract numbers using the Touch Math method in 2012. Photo by Veronica Weber/Palo Alto Online.

There should be a requirement for new office buildings to provide a percentage of space to non-profits at a BMR level to encourage non-profits to maintain a presence in the city.

Another big loss to the Palo Alto Community. They are an awesome resource for kids with learning differences. Guess the landlords will cram in another start-up with no community relevance at the location.

Just another one of those things that make Palo Alto less and less of a real community.

So disappointed that the community and Stanford did not rise up against this. It has far more long-term impact than the trailer park issue and for many more students.

@Maria, "there should be a req for new office ….to provide space to non-profits at a BMR"

What a great idea! In a vein similar to the requirement for new developments to have "art". This would help keep some variety and vitality in our community.

Morrissey-Compton and John Brentar are wonderful. Sadly, it's too late to keep them in Palo Alto, but please consider a donation to them.

It's a sad state of affairs when organizations that provide critical support to the kids in our community must move out of the city to stay in business. I hope MC stays viable in Redwood City. Just another in a string of businesses that have been here forever that had to leave to make way for VC funded start-ups staffed by 20 year olds who have no idea what resources they'll need when they "grow up" and have their own kids. University Art, another store that served this community for many many years, just moved to Redwood City too. Ironically, most of my shopping I now do in Mountain View at stores like REI, Bed Bath Beyond, Michael's Art Supply, Safeway, Trader Joes, etc. And for entertainment? I go to the gorgeous community theatre, Mountain View Center for the Performing Arts on Castro. I really don't know why people are killing themselves to move into Palo Alto.

This town is becoming shamelessly shallow. It is certainly an infinitely less enlightened place than it was even five years ago!

A lot of visually and audially challenged people depended on this place, as well as learning-challenged kids. What a waste! A senseless one at that, considering all the people with mega-bucks to spare living in the vicinity

Portland's Thai food darling Pok Pok will be popping up on the Peninsula this spring
By Elena Kadvany | 2 comments | 3,844 views

Flying: How to lower your impact
By Sherry Listgarten | 19 comments | 3,075 views