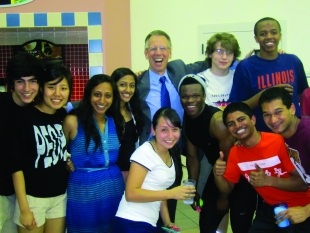 Glenn "Max" McGee enjoys a moment with students at the Illinois Mathematics and Science Academy in Aurora, Illinois, where he was president until 2013. Courtesy Max McGee.

Like this comment
Posted by says a lot about our community
a resident of Community Center
on Jun 6, 2014 at 8:25 am

"Here in Chicago, as I'm sure you know, politics is a blood sport," said IMSA's Cain, who as president of a nonprofit education foundation in Chicago also worked with McGee when he was state superintendent. "Max deals with it as well as anyone I know, and it looks like that skill set might come in handy (in Palo Alto)."


Elena - Thank you for a well researched, in-depth story.

Nice article. Had to look up the districts " strategic plan" which of course will be interesting to see how it's implemented and defined.

"With students as the center of our focus, the five focus areas of the plan – Academic Excellence and Learning, Personal Development and Support, Innovative Staff Development and Recruitment, Optimized Budget and Infrastructure, and Transparent Governance and Communications – form the basis for improvement efforts in important areas of the district’s operations."

I admit that this only one article and he hasn't started the job yet, but I have to say that it's been a long time since we have seen an overwhelmingly positive outlook for a PAUSD administrator. I wish the best to "Max" and the upcoming challenges of reigning in so many seemingly out of control issues (real or perceived).

I just hope that "Max" doesn't look on education as a business venture or that running PAUSD is a business in any way other than that he has to work within a budget and keep to it. I hope that he understands that getting rent from a PAUSD owned property is not more important than opening a new school to prevent other schools getting too big. I hope he understands that he gets plenty of funding from our property taxes and that expectations of additional money from PIE is just an enabling tool for wastages at the top level.

I also hope that we can find some worthwhile individuals to run for BoE with the same values.

Max, you are dealing with human children, not an assembly line of robot parts. Good to keep in mind.

@Padraic - when you talk about "human children" are you talking about the parents, or students?

Hired is the image. Don't be blinded by the shine. PAUSD needs a leader, not another cheerleader. I hope McGee is the former.

McGee, hope you do not get advised by our present super or board members, and if you do get their advised, make sure that you evaluate it and do not blindly believe in them. They have done big mistakes, and that is the reason Skelly is leaving, and possibly couple of board member will be recalled. They have failed our students big times. Please use your own knowledge so solve problems so they do not get too big, that way you do not have to spend our students education funds paying attorneys to fix your mistakes. If you put students first, you will do fine. One last thing, when a administrator or staff harassed sexually students or staff, and you want to keep them, give them a position as far away from kids as you can especially minorities and students with special needs. Otherwise you will be discriminating minority groups by giving them the worst teachers. Even better fire them to keep house clean.

Detroit County Day School is in Southfield MICHIGAN, not "Missouri" as stated in this article and in the accompanying boxed information sidebars. Obviously there is a world of difference between the two states.

I question whether we're going to get anything different from this super than the last one. "tenure leave of absence of Thomas Miller"?! Web Link

What was Max doing allowing a leave of absence? The guy should have been fired.

The Illinois Math and Science Academy (IMSA) is a residential public magnet school for the sciences that was established directly by the Illinois state legislature in 1985.

It attracts some of the best students from the entire state, and those students are backed by some very motivated parents as well.

Its funding is provided directly by the state, and as a result, the challenges faced by its administrative leadership are not like those faced by a mid-sized city's school district.

The private Princeton School of Math and Science is similarly endowed with great students, great faculty, and the aegis of Princeton University under which it operates. Again, not a situation that is very demanding of an administrator.

If I had a work associate who has known me for 20 years, and she was asked to think long and hard about me, and the best thing that she could come up with was "I have never heard anyone say a bad word against him", I would not count that as a ringing endorsement of my administrative leadership.

Elena, you have done a good job in putting together this history of Dr. McGee. Thank you.

I, for one, am a hopeful skeptic. I hope that Max does well for the PAUSD, but I'm prepared now for the possibility that such an outcome doesn't come to pass.

Report Objectionable Content
Email Town Square Moderator
1 person likes this
Posted by Margaret Cain
a resident of another community
on Jun 9, 2014 at 7:35 am

To the 'hopeful skeptic': When someone has labored in the maelstrom of Illinois politics for 20 years and is not only not in prison, nor tarred with the brush of corruption, but is still highly regarded, that most assuredly is a ringing endorsement in these parts.