Seven-week Stanford study at Avenidas transports residents to other worlds 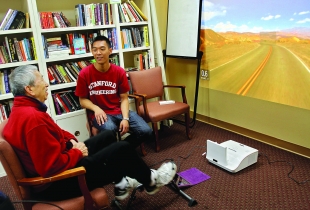 Stanford University engineering graduate student Albert Wu, center, talks with George Lee about his experience testing out a CGI exercise program in which Lee pedals down a simulated road in Death Valley at Avenidas on April 29, 2014. Wu and fellow students are testing out the digital immersive experience technology for seniors, hoping to address depression and encourage independence and socializing with more home-bound seniors. Photo by Veronica Weber.

Hi, I would like to know if one can buy these vr apps. Thanks, milt

Hello. I work with rehabilitation of elderly patients . I have great interest in this software (susie). How do I get? Is for sale?