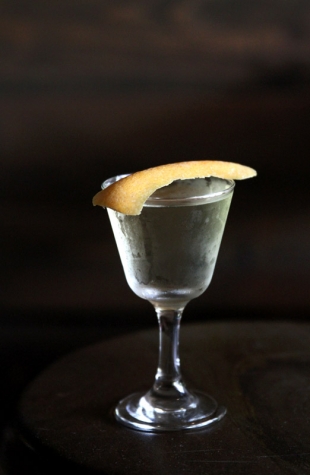 The "Steinberg Sting" from Lure+Till is made of Aviation gin, Dolin Blanc vermouth, Benedictine and orange bitters. Photo by Veronica Weber.

If you find yourself thirsty in downtown Palo Alto, you might wander into the Epiphany Hotel's restaurant, Lure + Till, and order the Peninsula Punch, made with Kappa pisco, lemon juice, pineapple and basil.

You might ask beverage director Carlos Yturria to tell you about Kappa pisco, a Chilean grape brandy he helped Grand Marnier develop a few years ago, and you'll get a passionate earful of the history of the South American alcohol.

"It's not my job to educate people, but I do like a little history," Yturria said.

Pisco was developed by Spanish conquistadors who planted quebranta grapes in Peru and Chile in the 16th century. The liquor eventually made its way to North America, and Duncan Nicol at the Bank Exchange Saloon on Montgomery Street in San Francisco reportedly invented the legendary "pisco punch" by mixing the South American brandy with pineapple, lime juice, sugar, gum arabic and distilled water, to the great delight of thirsty 19th-century San Franciscans.

Talking to Yturria, it becomes clear that he's passionate about cocktails -- the way a chef is about food -- and has put uncommon thought into Lure + Till's cocktail offerings, a rarity in Palo Alto.

Yturria comes to the Peninsula with a wealth of San Francisco bar experience. The South Texas native first started bar-backing when he was 17 years old and moved to San Francisco soon thereafter. In 1999, at age 21, he was working at the Starlight Room in the Sir Francis Drake Hotel; he also worked at Bacar, a wine-driven restaurant that opened in the city in 2000.

He recalls that he didn't know much about alcohol, wine or food at the time -- "Gosh, I'm 21 years old. What do I know?" -- but does remember tasting one wine in particular, a Spanish white from the Basque region called txakolina, that "blew his mind."

"Then all I wanted to do was learn about food and wine," he said. "So I just consumed myself with it."

The next few projects he took on were helping to literally build bars -- he helped build the Ferry Plaza Wine Merchant at the Ferry Building; he cut the marble used to build the bar at Italian restaurant and wine bar A16; he did construction at Michelin-starred Range, which opened in the Mission in 2005.

"From then on it just kind of took off," he said, "but along the way it was just about educating myself as much as I possibly could."

Fast-forward to downtown Palo Alto in 2014, where he ended up after working with the restaurant's chef, Patrick Kelly, at various San Francisco restaurants. He said he was also drawn by the opportunity to shape his own drink program in a burgeoning food-and-drink scene.

Currently, Lure + Till offers 10 cocktails, all $10 or $12. There's the more traditional, like a rum old-fashioned, and the more inventive, like the Bright Idea, a vivid, fuchsia-colored drink made with mezcal (a smokier tequila made from the slow-roasted hearts of agave plants), a dash of absinthe, fuchsia-colored prickly pear, lemon and agave nectar.

There's also the P.D., short for pink drink, which doesn't give it much credit. The drink mixes Smirnoff vodka with lemon juice and rhubarb that Yturria reduces in Riesling wine and supplements with vanilla bean.

One of the menu's "spirit-on-spirit" drinks is the Steinberg Sting: gin, a French vermouth, Benedictine and orange bitters. It's named after Rob Steinberg, the architect who designed Epiphany Hotel and whose alcohol of choice is gin, Yturria said.

Though the seasonal, thoughtful cocktail menu might be somewhat novel for the Palo Alto scene, Yturria said he's not trying to "reinvent the wheel" and doesn't want the menu to be "super esoteric." He also keeps food in mind, developing each cocktail like an aperitif, with the goal that it won't take away from the taste of the chef's dishes.

Yturria also crafted the restaurant's beer and wine lineup, with a range of regions featured by the glass (California, Spain, Australia, France) and lots of locals on tap, including Palo Alto Brewing's Hoppy Ending pale ale and the classic Bay Area brew Anchor Steam. There are also seven beers by the bottle, from Abita Brewing Light and a Lagunitas IPA to a red ale from Belgium and an oatmeal stout from Boonville's Anderson Valley Brewing.

But don't get attached to any of these libations, because the menus will be constantly changing, Yturria said.

He's already got some spring ingredient-driven drinks in the works, like bourbon mixed with lemon juice and a strawberry-black pepper shrub (pickled strawberries, black pepper and balsamic vinegar).

"We'll do some gin, some cherries, some ginger beer and lime," he mused about another forthcoming drink. "We'll leave (the cherries) in the glass so you can see the fruit float; you can see that it's fresh fruit. Especially with the patio here at Lure + Till -- oh my goodness, it's perfect."

The first few seconds after awakening; before I remember the virus
By Chandrama Anderson | 0 comments | 3,402 views

Can you stay healthy without making more trash?
By Sherry Listgarten | 6 comments | 2,820 views

Think about helping others in our coronavirus-affected area
By Diana Diamond | 7 comments | 2,591 views