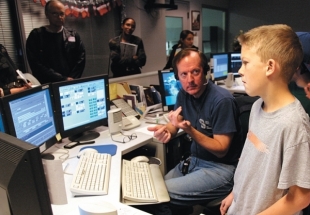 According to the article, the system helps to coordinate department communications and resources during joint mutual aid situations, but what about the rest of the time? Can the call routing for any one of the City's emergency response operators be transferred to another city's call center? Does the functionality exist to allow, for instance, to consolidate the calls into a single call center, so that one, or more, of the existing centers can be shut down?

Like this comment
Posted by Resident
a resident of Another Palo Alto neighborhood
on Mar 24, 2014 at 11:46 am

It makes sense for all this sort of cooperation between the 3 cities - and probably more cities too. We need to cut the expenses of admin and technical equipment by sharing as much as possible. We don't need 3 police chiefs either or too many other top jobs - too many chiefs and not enough Indians.

Maybe it's time to merge both the Palo Alto Fire and Mt. View Fire Departments. Close some stations and less management. Other cities have done this with great results.

> Maybe it's time to merge both the Palo Alto Fire and Mt. View Fire Departments.

Combining or sharing some fire operations, training and management seems to make sense. I'd guess they're waiting to see what will happen with PAFD's (now up for renewal) contract with Stanford before deciding what the next steps will be.

As an outsider, the new Intergraph system is a step backward. The link between PAFD's CAD and sites like firedispatch.com (Web Link) has been broken since the upgrade on March 18th. The public police logs for Los Altos and Mountain View are also missing a lot of details that were included with the old logs. I surprised that nobody at the Weekly cares.

So ... I wonder how LAH fits into all this? We often get shunted from one jurisdiction to the next. In addition to the three cities discussed here, there's also Santa Clara county and CHP. Depending on precisely where you are, it could be a different jurisdiction and personally I've had the experience more than once of going in a circle as everyone points the finger at someone else. Awkward, it is.

The PAPD non-emergency (650)-329-2413 number worked on Saturday. Not sure which agency answered, but they handled the call.