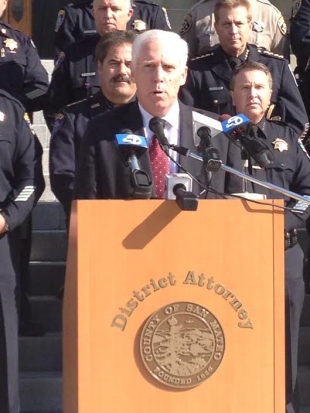 Dubbed "Operation Sunny Day" after the code the persons arrested allegedly used to signify when a murder was successfully carried out, the 18-month-long investigation is the most massive case prosecuted by the San Mateo County District Attorney's office in its history, Wagstaffe said Monday. Investigators served 80 search warrants, used GPS and social media, tapped land lines and cell phones and did "good, old-fashioned, hard work and legwork," Wagstaffe said.

The investigation stemmed primarily from five murders and attempted murders, including Oct. 5, 2012, murder of Chris Baker in East Palo Alto; the 2012 killing of Stoney Gibson in San Francisco; the 2013 killings of Jonathan Alcazar and Lamont Coleman in East Palo Alto, less than two weeks of each other; and a 2013 attempted robbery of Plaza Jewelers in Redwood City.

All 16 people are in custody, with 11 in San Mateo County Jail and five in other jurisdictions. Nine are charged with capital murder with special circumstances.

Assistant District Attorney Karen Guidotti, who spearheaded the investigation, said the warfare stemmed from struggles for control among the local gangs.

"It's a question of control, power and respect. One gang member slights another by offending someone, and it becomes a cycle of retaliation," she said.

"Too many young men have died violently, causing loved ones to grieve. ... Our work will not be done until there are zero homicides and our community is safe again," he said.

WHAT?? is a registered user.


We need to take back control of our town from these criminals by being active in the anonymous hotline system. We have all seen these activities going on right in front of us and maybe through fear of reprisal, as in the case of Lamont Coleman, residents have not called in. Again, EPA is going back on track to being the murder capital of the world. We need to stay active in policing our own house and not look the other way. I am so glad these were taken off the street for now and cant wait for their trials to begin.

Hmmm is a registered user.


I'd be happy to call an anonymous hotline - if I had any info to report. One of the reasons people don't use it is because they have nothing to report. The ones who do - well, how does one get "inspired" to do the right thing? [Portion of post removed.]

The first few seconds after awakening; before I remember the virus
By Chandrama Anderson | 0 comments | 2,395 views

Can you Stay Healthy without Making More Trash?
By Sherry Listgarten | 2 comments | 1,689 views

Think about helping others in our coronavirus-affected area
By Diana Diamond | 2 comments | 1,562 views