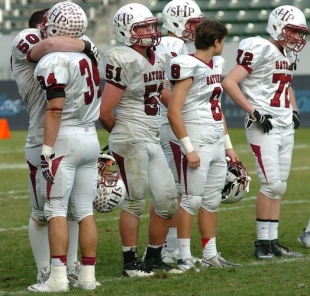 Sacred Heart Prep reached its first-ever appearance in a CIF state championship game by being successful running the ball, keeping turnovers to a minimum and holding opponents to an average of just 8.7 points a contest over a 14-game season.

When it came to Game 15, however, the Gators were unable to continue that successful trend.

Averaging well over 200 yards a game on the ground this season, the Gators managed just 181 -- with no individual surpassing 100 yards. SHP also lost three fumbles and suffered one interception that led to one TD and two field goals. And, SHP's vaunted defense was touched for three touchdowns in the first quarter.

All that added up to a 27-15 loss to Corona del Mar on Saturday in the Division III finals of the CIF State Football Bowl Championships at the StubHub Center in Carson.

"It was frustrating," said SHP coach Pete Lavorato, who guided the Gators to a 13-2 record during a season that included CCS Division IV and NorCal titles. "We'd get down there (near the end zone) and something would happen. We haven't turned the ball over much this year."

Turnovers, however, proved to be the difference in this one as the Gators battled back from a 21-0 first-quarter deficit and made a game of it with a 37-yard interception return by Andrew Robinson and a 47-yard run by Ben Burr-Kirven to close to within 21-15 at the half.

"That's always difficult," Lavorato said of the huge early deficit. "But we didn't give up, and we kept coming back."

A fumble by SHP sophomore Mason Randall to open the second half, however, led to a 31-yard field goal by the Sea Kings and a 24-15 game.

SHP appeared to gain back some momentum on its next series and was driving for a possible touchdown when Andrew Segre, the team's leading rusher, re-injured a previously dislocated shoulder and fumbled the ball away on a handoff at Corona del Mar's 17.

"That was really frustrating," said Segre, who finished with 54 yards in 16 carries after rushing for 351 and six TDs in the CCS title game two weeks ago.

"What a warrior he is, playing like that all year," Lavorato said.

SHP had two more chances in the fourth quarter to close the gap when a pitch from Randall to Burr-Kirven was fumbled and recovered by Corona del Mar. That led to a 35-yard field goal and a 27-15 lead.

SHP took the ensuing kickoff and marched down to the Sea King's 10, but a big penalty for an illegal shift moved the Gators back five yards. A fumble lost a yard and Randall's pass to Andrew Daschbach left the Gators on the 8-yard line, short of the first down.

But, it was the Sea Kings accomplishing perfection as they became the first team in state history to complete a 16-0 season.

"They are a good football team, there is no doubt about it," Lavorato said of Corona del Mar. "They deserved to win this game."

Lavorato, however, was equally effusive of his own team, which was led by Burr-Kirven's 16 tackles (14 solo) and 77 yards rushing on seven carries.

"You guys played exceptionally," he told his players after the game. "I know I and the rest of the coaches are tremendously proud of what you have done this year and what you did today. But, it doesn't always go your way in life . . . of course it hurts; it hurts big time. Once the pain goes away, you'll reflect back on what a tremendous season you just had. This is a great life experience."

The first few seconds after awakening; before I remember the virus
By Chandrama Anderson | 0 comments | 3,643 views

Think about helping others in our coronavirus-affected area
By Diana Diamond | 7 comments | 2,762 views