Palo Alto historian calls for relics of the present and near-past, to save for the future 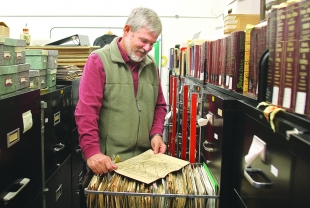 Palo Alto historian Steve Staiger pulls out an old map of Palo Alto at the temporary location of the Palo Alto Historical Association's archives on October 31, 2013. Photo by Veronica Weber.

Great story! The people who live in a community should have a way to know their community's history -- since, after all, the past shapes the present.

I have consulted with Steve on numerous occasions researching various topics of Palo Alto history, and can say unreservedly that Steve Staiger always provides both impressive, and courteous, service to myself. It is a pleasure to visit with Steve, whose knowledge of the Historical Society’s archives is encyclopedic. In my opinion, Steve Staiger sets the bar for customer service, even though that is not his primary role.

The historical society’s archive is paper-based, as it were, stored in a couple dozen filing cabinets. For the most part, Steve can retrieve archival material in a very short time on virtually any subject in the archive. However, it would be a huge step forward if the inventory of all of these filing cabinets were placed on-line, as a “finding aid”, which would allow interested parties to investigate the whole of the archive without having to actually visit the location where the materials are physically located. Advertising the contents of the archive would likely help to increase not only people’s knowledge of its existence, but might also increase the use of this material by people interested in Palo Alto history.