Provocative, playful art that touches all of us | News | Palo Alto Online |

Provocative, playful art that touches all of us 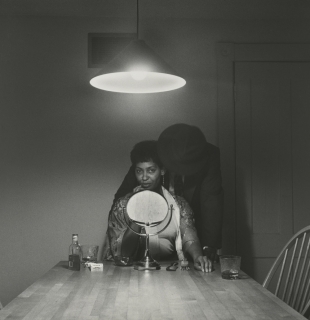 Carrie Mae Weems' photo "Untitled (Man and Mirror) from the Kitchen Table Series, 1990." A major retrospective exhibit of Weems' work is now at the Cantor Arts Center at Stanford University.

Carrie Mae Weems' art tells the story of everyone and no one.

She looks at marginalized people who are no one to society: slaves, forgotten singers, artists who never graced the walls of a museum, women whom artists never wanted to paint. Then she'll turn around and create a series so personal that all viewers can relate: an intimate kitchen-table story of love found and lost.

Weems is often called a chronicler of the African-American experience, but her work is broader than that. Through photography, video and text, she deals with matters of race and gender in a way that is just as frequently described as universal.

A major retrospective of Weems' work, in the process of traveling the country, arrived last week at Stanford's Cantor Arts Center. About 100 photos, videos and installations will fill the large downstairs gallery through Jan. 5 before heading to the Solomon R. Guggenheim Museum in New York City. The show spans three decades.

One of the most striking aspects of Weems' work is the intense closeness between artist and art. Weems is everywhere in the exhibition, from her distinctive writing voice in the prose she often pairs with her photos to her striking face and figure (she frequently serves as her own model).

As Harvard professor Henry Louis Gates Jr. wrote in a foreword to the exhibit catalog, "[Every photograph, every fabric installation, every film is suffused with her inimitable sensibility, what Weems herself calls a 'feverishly toned polemic' that nonetheless is rich with humor and humanity."

Her "Kitchen Table Series" (1990) combines her face and voice to tell a painful love story. In this narrative, almost theatrical series of photos all taken at one domestic table, Weems is pictured as a fiercely independent woman having emotional moments: with her man, her friends, her daughter. She and her lover embrace in one image, eye each other suspiciously in another. There are brooding nights alone with cigarettes, laughing evenings with friends, and complicated interactions between mother and daughter.

The photos need no explanation to be accessible. But Weems added more depth by pairing them with a story of star-crossed love. "They met in the glistening twinkling crystal light of August/September sky," Weems wrote in the story on the exhibit wall. "They were both educated, corn-fed-healthy-Mississippi-stock folk. Both loved fried fish, greens, blues, jazz and Carmen Jones. He was an unhardened man of the world. She'd been around the block more than once herself, wasn't a tough cookie, but a full grown woman for sure."

Though the series is not an explicitly African-American story, it is a richly told tale about compelling non-white characters, something uncommon in the history of Western art. When Weems was creating the series in the '80s, "black women had not been imaged in a way that I could appreciate, or admire," the artist is quoted as saying in the exhibit catalog.

Black women were certainly not the typical subjects of iconic Western painters, a tradition that Weems skewers in her 1997 series "Not Manet's Type." In its photos, a scantily clad Weems drapes herself around a bedroom as though waiting for one of the masters to drop by with a palette.

"It was clear, / I was not Manet's type / Picasso -- who had a way / with women -- only used me / & Duchamp never even / considered me," Weems writes in the companion text, adding wryly: "But it could have been worse / imagine my fate had / de Kooning gotten / hold of me."

The matter of women and people of color being underrepresented in museums comes up again -- a bit more gently, a bit more obliquely -- in the "Museum Series." Weems has been taking photos in this ongoing collection since 2007. In each, she appears in a long-sleeved, flowing black dress, her back to the camera. The figure is photographed in front of the Louvre, the Guggenheim in Spain, the Philadelphia Museum of Art, the British Museum and many other houses of art.

During an artist talk last week at Stanford, Weems showed many slides of this series and other similar ones. Using an "old raggedy camera and a tripod," she has photographed herself in that black dress, facing away, in many locations, she told the large audience. One of the most striking photos (which now occupies a large wall at the Cantor) is 2006's "A Broad and Expansive Sky -- Ancient Rome," in which Weems stands on a beach looking out into an empty, gray sea.

With the "Museum Series," Weems said, she was asking the question "Who belongs in and out of museums?" Why is the woman of color standing outside and not portrayed or represented on the gallery wall?

At other times, Weems has also pointed out the universality of the anonymous-looking woman. "This woman can stand in for me and for you; she leads you into history. She's a witness and a guide," the artist is quoted in the exhibit catalog.

To the Stanford crowd, she joked: "I didn't bring my camera or my dress to Stanford. I'll have to do the Cantor next time."

Chances are she'll be back at some point. Born in Oregon in 1953, Weems has deep roots in the Bay Area, where she studied movement with Anna Halprin's Dancer's Workshop, was active in the labor movement and earned a bachelor of fine arts degree from California Institute of the Arts. She went on to earn a master's at U.C. San Diego and teach widely. This fall, she won a MacArthur "genius" grant.

In person, Weems is warm and open, her voice smooth and musical. She laughs often. Her humor may surprise viewers who know only her grimmer work, such as the 1995-96 series "From Here I Saw What Happened and I Cried." In it she paired historic chromogenic prints and etched text on glass. The prints of African Americans are early daguerreotypes "intended to justify racism through physiognomy," an exhibit card reads. Some are images of exaggerated sexuality; in other photos, the people are photographed to look like scientific curiosities.

Weems addresses the sad images with her poetic text. "You became a whisper a symbol of a mighty voyage & by the sweat of your brow you labored for self family & other," reads the text across a young man in a hat, his smile faltering.

Also in the exhibit are photos from the 2010-11 "Slow Fade to Black" series, in which African American female singers and actresses of the past stand in blurred photos, fading out of history and current consciousness. Marion Anderson, Nina Simone, Dorothy Jean Dandridge and others are barely recognizable.

"I think about them and I miss them. I miss the sound of them in my life," Weems told the Stanford crowd.

In 2004, Weems began seriously exploring video. Her lyrical, sensual voice carries over into the works on exhibit at the Cantor, which include the surreal "Italian Dreams" (2006).

"Coming Up for Air," her first video work, will have a special screening at noon Oct. 27 in the museum auditorium. Made in 2003-4 and first screened at the Museum of Modern Art in New York City, it is a collage of vignettes combining live action and still photos about human relations, including relationships between white men and women and black women in New Orleans.

"The addition of the moving image in my work represents a shift that allows me to finally negotiate the space between museum culture and popular culture," Weems wrote on her website.

The artist's love for the still photo and the perfectly composed piece of text, however, endures.

During her talk at Stanford, Weems spoke passionately about her love of words and the joy of choosing just the right typeface.

An audience member asked what her favorite font was. Weems laughed. Baskerville for writing letters, she said. Sometimes, Futura.

"Right now," she confessed, "I have a thing for Impact."

What: "Carrie Mae Weems: Three Decades of Photography and Video" is at the Cantor Arts Center with some 100 works.

These local restaurants are donating meals to Bay Area residents in need. Here's how to help.
By Elena Kadvany | 6 comments | 11,515 views

Coronavirus: Plan ahead now for a big outbreak
By Diana Diamond | 20 comments | 4,399 views

Will the Coronavirus Save Lives?
By Sherry Listgarten | 29 comments | 4,061 views

The first few seconds after awakening; before I remember the virus
By Chandrama Anderson | 0 comments | 1,246 views