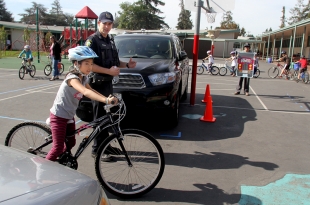 Police officer Joshua Salkeld teaches third-grader Nerissa Lin how to look for oncoming traffic and safely exit a driveway from between parked cars during a bike safety fair at Fairmeadow Elementary School on Oct. 8. Photo by Veronica Weber.

I wish the cops would teach parents as well. The other day, I saw one driver blasting his horn at a couple of kids bicycling in front of him. They were riding safely and legally, just too slow for his BMW.

Like this comment
Posted by Resident
a resident of Another Palo Alto neighborhood
on Oct 10, 2013 at 6:57 pm

I also agree that the schools should make it family bike rodeo day. I see a lot of parents teaching kids really bad habits, such as riding on the wrong side of the street and not stopping at stop signs. Parents should also ride behind their kids to keep an eye on them, rather than in front. Most ride in front and have no idea what their kids are doing behind them, sometimes it is silly behavior and the kids do not realize that they are riding dangerously.

Impeding traffic is illegal. From what you say, the BMW driver was justified.

I think the junior high and HS kids need a refresher too. I drive 2 mph around them because they loose canons. Sometimes they just swerve in front of you without signaling and don't even look because they have headphones in. It's annoying and puts me in danger and my children. I'm a biker, I'm a mother and I sometimes drive. I try to be aware and alert but if some stupid kid pops out in front of me and I can't break fast enough I will be angry at him for being so careless and putting my children's and my life in danger. Everyone on the road needs to be wiser. including those parents with their giant mini vans and SUV's who are always running late to everything and flying all over the place. This is a biking town. ACCEPT IT! Bikers, don't give the rest of us a bad name. AND STOP BIKING ON ALMA!. Go to BRYANT OR PARK BLVD. There's NO ROOM TO BIKE ON ALMA, you're putting everyone in danger.

I am so grateful that our children are given this opportunity to learn these basic safety skills and that our community is encouraging bicycling as a safe, fun, and socially responsible way to get around. Anyone interested in childhood obesity, childhood asthma, or traffic congestion should remember that biking improves outcomes for all of these social ills. Anyone who wants our children to grow up on a planet that is habitable might also keep in mind that biking generates zero greenhouse gases. As for safety - it's important to remember that virtually all "bike" accidents involve CARS. More bikes = less traffic, less pollution, fewer accidents. Hooray for biking!

Parent/biker is right: I have seen the PAPD pull over people on bikes and cite them for riding on Alma.

But I also see parents on bikes with their children, doing dangerous things like running stopsigns and crossing the street in front of cars, while their children peddle frantically to keep up. I have also seen several parents bikeriding and wearing helmets, however, the children on the bike trailer they are pulling are wearing nothing on their heads!