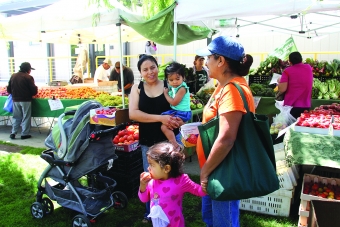 I'm a neighbor on Woodland Avenue and when I've stopped by previously and asked about the garden, the person on site said, "This is a private garden".

My understanding is that Collective Roots, while it grows food on a former residential site on Woodland Avenue in East Palo Alto, is not run by people who actually live East Palo Alto.

I don't agree with too many of the interviewees' comments. I live in EPA, and shop at the Farmers' Market nearly every week. It is small but very nice, with lots of organics, fruits, veggies, and herbs. Last week there was even a man selling mustard greens grown in his backyard. We ate them today - yummy! Prices are waayyy lower than the Palo Alto Sunday market. Way lower.
Mi Pueblo is a godsend. Well-stocked, large, low prices, and usually good service. I shop there several times a week. EPA is a small city. I'm not sure how many grocery stores it could support. One large one seems like plenty. I really don't think people make grocery shopping decisions based on ethnicity. Really? I do think habit is an issue.
EPA is not a 'food desert'. That is a recycled truism liberally applied to any minority community. There are much better things to write about.

Dear Member: the garden at 1785 Woodland Ave is a public, community garden and it has open garden beds! I sincerely apologize if you received other information. If you are interested in joining the community garden, please stop by and let us know. In the coming months we at Collective Roots are also working with Woodland Park properties to install two community garden sites at different Woodland Park apartment complexes, so depending on where you like you may find another garden open and accessible to you that is even closer!

Dear EPA Mom: Thank you for your comments. I absolutely agree with you about the term "food desert" and never choose to use it. I discussed this in my interview with Elena as well, although it didn't come through in the written piece.

Here we again with another article condemning residents of East Palo Alto. Have the writers of this newspaper thought of any other cities to criticize besides EPA. Seriously people!?! It seems to me every time I see our city in your newspaper its always something negative. Yes we are a large minority community but with more than just negative news about shooting and poor eating habits. No one praises the positive things our community offers. Your writers could do a better job.

To clarify. We are not a "food desert" community. Its not correct of the writer to label a city because you want your editor to praise your so called "great" story. We don't all go to McDonalds to save money. Its not cheap fast food for your information! So you didn't quite analyze your prices correctly... AND apparently didn't take the time to investigate what other services are offered in our community. Shame to this writer for your story.