Carter runs the 400 hurdles as a professional 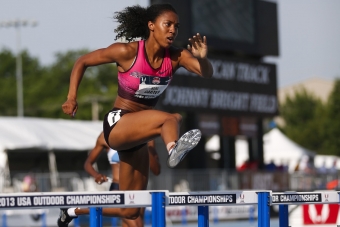 Stanford junior Kori Carter ran her first race as a professional on Friday in the first round of the women's 400 hurdles at the USATF Championships in Des Moines, Iowa. She qualified for Saturday's finals. Photo by Spencer Allen/Sportswireimage.com.

A very smart move Kori. I like that Kori will have Nike pay for her final year at Stanford.

Ms. Carter has done everything that can be expected at the collegiate ranks and it seems like a win win decision for everyone except Stanford Track as Stanford will lose an incredible talent.