Program participants experience nature hands-on, many for the first time 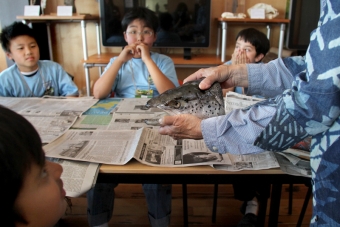 From left, Aditya (foreground), Justin, Harry and Tony react as Barbara Shapiro of Environmental Volunteers unveils a fish head to teach the young students about biology during the Junior Naturalist Program at the EcoCenter in Palo Alto on May 22, 2013. Photo by Veronica Weber/Palo Alto Online.

All kids can learn about the Baylands these days is how much it stinks, how dangerous it is to be out there, and how impossible it is to carry on a conversation with airplanes flying overhead every minute.

If the city could just solve those three problems the Baylands might be a very nice place.

The Junior Naturalist program sounds like a winner! I suppose we are better equipped up here than the Environmental Education Center at the end of Grand Blvd in Alviso, which would be a much shorter trip for these kids. It's being closed for renovations this summer, so maybe next year!

Regarding danger, smell and noise, it all depends on what you are used to and your vested interests.

> Regarding danger, smell and noise, it all depends on what you are used to and your vested interests.

LOL, what is that supposed to mean?

Keeps the traffic down.

Please Apply So We Can Reject You!
By John Raftrey and Lori McCormick | 6 comments | 2,707 views