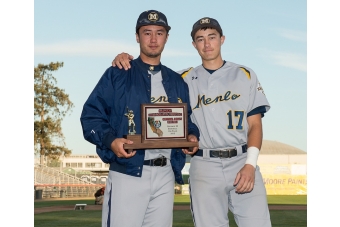 In the past two years, the Menlo School baseball team has had no answer for Pacific Grove.

On Saturday, the Knights lost to the Breakers for the second straight year in the Central Coast Section Division III tournament championship game, 10-4, at San Jose Municipal Stadium.

"It was almost a nauseous feeling of deja vu," Menlo School coach Craig Schoof said, referring to a 10-6 loss to Pacific Grove in the 2012 title game. "Last year we were up 4-0 (when the game started to get away from us)."

This time the No. 5 seed Knights (22-8) went up 2-0 in the top of the first off run-scoring singles from Adam Greenstein and Christian Pluchar before things started to unravel. In the bottom half of the inning, No. 2 Pacific Grove erupted for six runs, effectively sealing the outcome.

The Knights didn't score again until the outcome had already been decided, plating two runs in the seventh. The Menlo hitters had a rough time against Pacific Grove (31-0) starter Conyol Cody (four innings) and reliever Chris Clements, who combined for 11 strikeouts. The Knights also left 13 runners on base.

"Their pitchers were good, but we seemed tentative at the plate," Schoof said.

Indeed, every time Menlo mounted a threat -- it put runners on base in every inning -- it was left frustrated by not being able to get them home for the majority of the game.

"Those are two of the best pitchers we've faced all year, especially the lefty (Cody)," said Menlo first baseman Mikey Diekroeger, who finished with two hits an a RBI. "We were pumped up by getting ahead early, and then to watch them put up a six spot was pretty deflating."

Knights starter Austin Marcus simply didn't have it, allowing six runs and four hits while walking four in one inning. Even though Menlo fell in the championship game for the second straight season, Schoof and Diekroeger expressed optimism for the future. It's easy to see why, as the Knights had just two senior starters in Saturday's title contest.

"Eight of our 10 starters are back, and we also had an undefeated frosh-soph team," Schoof said. "We hope to be back here. As a coach, all you can ask is for you to get everything out of your players you can. If you stepped back and said before the season we'd end up 22-8 and reach the CCS championship game, you'd say our guys played to their potential."

The Knights finished with 10 hits, all singles. Graham Stratford, Will King and Marcus had two hits each. The Stanford-bound Diekroeger can't wait to get back to the postseason again.

"Obviously our goal is to win CCS next year," he said. "There's nothing like playoff baseball. The pressure is fun, and every pitch has something riding on it. CCS is where memories are made. We lost this one, but in the three playoff games before this, we had a blast."

Pacific Grove's 31-0 record is the best in CCS history and the second-best mark in state history, behind only Chatsworth's 35-0 mark in 2004, according to Cal-Hi Sports. The Breakers also stretched their winning streak to 38, which includes that victory over Menlo in last season's Division III final.

The first few seconds after awakening; before I remember the virus
By Chandrama Anderson | 0 comments | 3,641 views

Think about helping others in our coronavirus-affected area
By Diana Diamond | 7 comments | 2,762 views