VIDEO: Celebrating the 'Youth of the Year'

Teens talk of challenges, triumphs during celebration at Boys & Girls Club of the Peninsula 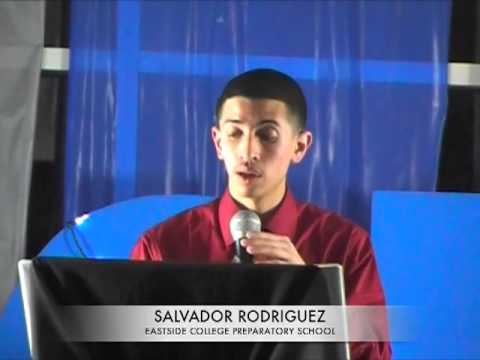 Three teenagers told stories of hardship and hope Wednesday night in semi-finals of the "Youth of the Year" speech competition held at the Moldaw-Zaffaroni East Palo Alto Clubhouse of the Boys & Girls Club of the Peninsula.

Rodriguez, a high school senior who hopes to graduate from college and become a computer engineer, was chosen to represent the East Palo Alto clubhouse in the next level of competition, to be held Friday, Feb. 1, at the same venue.

Rodriguez is a soccer player and a Boys & Girls Club coach who says he aspires to "break the cycle of gang violence in East Palo Alto by increasing positive influences."

He will compete Friday against speech winners from the Boys & Girls Club of the Peninsula's other two clubhouses, the McNeil Family Clubhouse in Menlo Park and the Mervin G. Morris Clubhouse in Redwood City.

The winner of that round will advance to a Northern California competition.

"Youth of the Year" contestants are evaluated on their resilience, accomplishments and how well they represent the values of the Boys & Girls Club. The Boys & Girls Club of the Peninsula is an after-school home for K-12 children in East Palo Alto, eastern Menlo Park and Redwood City.

Thanks for good news about terrific young people. Kudos for their good work!

Great news about these kids but MORE COMPETITIONS? Do they really need one?

All of these kids are awesome and have overcome enormous hardships. They easily could have used that as an excuse to give up, but instead they have persevered to become productive members of society and represent EPA well. I know one of these young men personally and could not be more proud of him. I wish they all could have won.

Your handle appears to read tired of the ?

Can you stay healthy without making more trash?
By Sherry Listgarten | 4 comments | 2,510 views

Think about helping others in our coronavirus-affected area
By Diana Diamond | 5 comments | 2,327 views