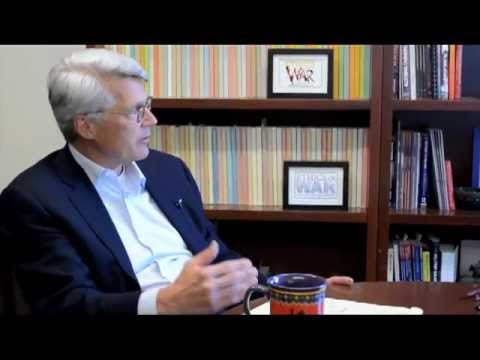 Scott Sagan, nuclear disarmament expert, Senior Fellow at CISAC and Stanford professor of political science, talks with Lisa Van Dusen in the fall of 2012 about his life-long career in academic research, teaching and policy devoted to disarmament and nuclear non-proliferation.

A Senior Fellow at the Center for International Security and Cooperation (CISAC) at the Freeman Spogli Institute for International Studies at Stanford University, Sagan shares his belief, central to CISAC's mission, that scholarship should be applied to government policy. After earning his PhD in political science at Harvard University in 1983, Sagan spent two years in a windowless room in the basement of the Pentagon working on nuclear arms from the operational perspective. Sagan points to that experience as pivotal to his realization that government officials must utilize research-based data, theories and evidence to enable smarter nuclear-arms policy.

Sagan reflects on the early influences on his career choice, and touches on historical and current nuclear threats, close calls and solutions. Looking to the future with cautionary hope at some of the world's nuclear hot spots including Iran, Israel, Pakistan and India, Sagan elaborates in an opinion piece in the July 2012 issue of Nature, "A Call for Global Nuclear Disarmament," asserting that as danger from nuclear weapons is mounting, it is time to take control of the nuclear fuel cycle and move towards a world without warheads.

As the Caroline S.G. Munro Professor of Political Science at Stanford, Sagan has won prestigious teaching awards. Sagan shares stories about his creative use of role-play in teaching diplomacy on campus and around the world through which diverse students learn first-hand about conflicts of interest and motivation. He also teaches The Face of Battle, a renowned Stanford Sophomore College course, when he's not watching baseball or meeting with heads of state.

Sagan lives with his family in Palo Alto.

Watch video: Sagan recalls poignant anecdotes from an intimate 2002 gathering in Havana to mark the 40th anniversary of the Cuban Missile Crisis for those involved from various vantage points.

Can you stay healthy without making more trash?
By Sherry Listgarten | 6 comments | 3,068 views

Think about helping others in our coronavirus-affected area
By Diana Diamond | 7 comments | 2,805 views

The University of California’s flexible policies during COVID-19
By John Raftrey and Lori McCormick | 5 comments | 1,148 views