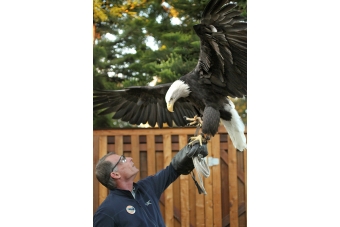 The Palo Alto Junior Museum and Zoo has been known as many things over the decades, but it's safe to say that a retirement home hasn't been one of them -- until now.

Until four years ago, Aikin worked at the San Francisco Zoo for 29 years as curator of birds and later director of conservation. He was also one of Sequoia's first trainers.

Sequoia was hatched on Swanson Island in British Columbia in 1988 as part of an endangered-species recovery effort. Wilderness sanctuaries there collected 12 young eagles and released them off the coast of Big Sur. Bald eagles will breed in a new habitat if they are introduced to that habitat within their first eight weeks of life. Sequoia was one of the 12 birds released that year.

"I was working on a recovery effort of bald eagles at the time, breeding and reintroducing bald eagles, when we acquired a bird who was found shot in Ferndale, Calif.," he said.

The bird, later named Sequoia, could not be set free because the gunshot would left her with a paralyzed tail. The San Francisco Zoo accepted Sequoia as a salvage bird, and Aikin took on the responsibility of training her to be a bald eagle ambassador.

Twenty four years later, he was the obvious choice to be the raptor's new owner.

With funding from the Brin Wojcicki Foundation, run by Google co-founder Sergey Brin and his wife, the Palo Alto zoo received enough money -- roughly $3,000 a year -- to fund retirement for the middle-aged bird. Most of that goes to her diet of frozen rats, mice, fresh fish, quail, chicken and rabbit.

A bald eagle can live for more than 50 years, though most die as juveniles.

At the Palo Alto zoo, Sequoia lives in a mew, a house for birds of prey. Rather than living in an aviary large enough to hold a bird of her size, Sequoia has been conditioned to be around people and can be let outside by her handlers. Every day, trainers exercise Sequoia and take her out of the mew to sit on a perch and preen in the sun.

The 11-pound eagle can fly back to her trainer to receive food and is comfortable with crowds of children and adults.

According to Aikin, Sequoia is one of the best-trained eagles in the United States, making her the ideal bird for education programs. Many types of birds can be trained, but as Aikin said, "It's harder to inspire a child with a chicken than with a bald eagle."

Unlike other animals at the Palo Alto Zoo, Sequoia will not be on display for the general public but rather used for educational programs and events.

"She is a wonderful addition to the Palo Alto zoo because she the national symbol. ... She helps to inspire kids to wonder and is an example of a recovered endangered species, so there are lots of stories to tell," Aikin said.

Bald eagles recently returned to San Mateo County after nearly a century, and Aikin hopes Sequoia will help educate the community about life in watershed properties, where the once-endangered species resides. Because of endangered-species recovery efforts, bald eagles left the endangered species list in 2007.

Thanks for a really nice story for a Sunday read.

She's beautiful! Thank you to the Junior Museum and Zoo for adopting her and to the Brin Wojcicki Foundation for providing the means for her comfortable retirement.

Nice to know that the Brin Wojcicki Foundation is helping out animals.

This is wonderful news and gave me chills! Now all I have to do is find out when Sequoia will be out for those "educational" periods so that I too can experience her beautiful presence!

gcoladon is a registered user.


Thank you for this nice gift, Sergey and Ann!

Such a magnificent creature! May Sequoia enjoy her new home for many, many years. Thank you to the Brin Wojcicki Foundation for making this possible.

I wish we could see her on display. I could imagine there might be good reason to not have her out all the time, but the options for seeing her seem really limited and totally undefined.

"Unlike other animals at the Palo Alto Zoo, Sequoia will not be on display for the general public but rather used for educational programs and events."

What does that mean? Available for a fee for private parties?

Thank you! The best Palo Alto news in years!!

The first few seconds after awakening; before I remember the virus
By Chandrama Anderson | 0 comments | 2,692 views

Can you stay healthy without making more trash?
By Sherry Listgarten | 2 comments | 1,964 views

Think about helping others in our coronavirus-affected area
By Diana Diamond | 4 comments | 1,876 views