Holiday Fund: Reaching out to the streets 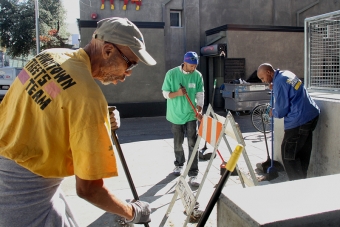 Ken Pierre was living on the streets for more than 15 years, spiraling downward amid drug and alcohol addiction. Every time the disabled U.S. Army veteran got a job, he was fired because of his drinking, he said. Every day was a struggle; every night was worse.

"I was in a lot of programs with the VA, but I couldn't get it together," he recalled.

Pierre had no family nearby. He constantly worried about where he was going to sleep and how he was going to eat. For a time he lived in the back seat of his car, shivering in the cold, damp nights, he said.

But his life took a fortuitous turn when he made contact with another disabled veteran through Project Homeless Connect and joined the Downtown Streets Team, he said. Outreach programs allowed him to connect with services that helped him end his cycle of addictions and homelessness.

"I never want to live like that again," he said.

Now the affable Vietnam-era veteran is a Streets Team manager who helps others reclaim their lives. He supervises two teams of five and six people who keep downtown Palo Alto's business district clean, he said.

"It seemed like a miracle overnight. My lifestyle changed, and I worked on my tools. It connected me to other people who were working on changing their lives," he said.

The Downtown Streets Team, which started in 2005, empowers homeless men and women with skills, counseling and dignity so they can become self-sufficient. It uses jobs-search classes, caseworkers, housing placement and more to help people put an end to their homelessness. More than 135 people have found jobs or permanent housing by becoming part of "the team."

This past year, the Holiday Fund awarded Project Homeless Connect $15,000 as part of a three-year grant. The program has a peer-to-peer outreach program and hired an intensive-outreach caseworker to help homeless men and women and streets team members. They access services such as permanent-housing placement through the Section 8 Direct Referral Program, help completing applications, assessment and planning for their goals, development of job-search skills and legal advocacy.

"I hear all kinds of miracles all the time," Pierre said.

"People now stay in apartments who were never able to do it before. Lawyers help guys get on Social Security. Many veterans are disabled and didn't know it. Guys get back on track, and there is reconnection to society."

Pierre said he learned about the program through another disabled veteran who had reached out to him. Streets Team members individually provide 10 or more hours each day of peer-to-peer outreach through Project Homeless Connect while they work their shifts, according to Chris Richardson, program manager.

Pierre was able to take part in a lottery that provided him with paid-for housing for one year. He received food and clothing and counseling that helped him conquer his addictions.

He has gained confidence by learning to manage people on the streets team and through public speaking. He is now a lecturer on behalf of the Downtown Streets Team, talking to dignitaries about his situation and how Project Homeless Connect and other team programs have changed his life.

"We have a lot of VIPs who have been helpful with the Downtown Streets Team: probation and parole agents, police and mayors. I know them by name, and they know me," he said proudly.

Pierre gets up every morning and hits the streets at 8 a.m. Now it's not about living on them but about managing his crew. He manages two shifts: from 8 a.m. to noon and from 1 to 4 p.m. Now he always shows up for work on time.

"I report to work every day," he said.

It's a far cry from his drinking days, he observed.

"I can do things I couldn't do before. It's natural for me now to pay my rent on time and my bills on time," he said.

What Pierre really likes are the Thursday meetings when the teams gather at the Opportunity Center on Encina Avenue to talk business, he said. It's also a time for open communication when people can air their concerns and receive support for their achievements. Case managers are on hand, and there is always support and wisdom from others who have been in the same situations, he said.

"My confidence went up 100 percent by me helping people. It's always about helping somebody. They need to hear from people who have been through what they are going through," he said.

Pierre said he always tells people, "If you do everything they tell you to do, you'll probably never be homeless again."

His next goal is moving from his tiny studio to a one-bedroom apartment. He has secured the funding, but he needs to find an affordable place. Because of his disabilities, he can't work a regular job, but if the Streets Team expands to other locations, he would like to help, he said.

When he was most needy it was the outreach that helped him through, he said.

"I found a lot of people very helpful. They were total strangers, but they were very kind. I only met them a couple of times, but they didn't forget me," he said.

Project Homeless Connect and the Downtown Streets Team have been an inspiration, Pierre said.

"I've seen a lot of people change. I'm in a position to help people, and I like it."

How can people give to the Holiday Fund?

Like this comment
Posted by Bill Johnson
publisher of the Palo Alto Weekly
on Nov 17, 2012 at 5:01 pm

Bill Johnson is a registered user.


There is a full page ad and a remittance coupon in each week's paper through early January.

For more information, including a list of past grants and a link to the online donation site, you can also go to Web Link

Thanks for your support of local programs serving kids and families!

Singapore's oldest cafe was about to open in Palo Alto. Then, the coronavirus hit.
By Elena Kadvany | 2 comments | 5,893 views

A Pragmatic Approach to A Trillion Trees
By Sherry Listgarten | 4 comments | 4,214 views

Repairing a Disagreement with your Beloved & “Physical” vs. “Social” Distancing
By Chandrama Anderson | 2 comments | 2,903 views

The University of California’s flexible policies during COVID-19
By John Raftrey and Lori McCormick | 6 comments | 2,759 views