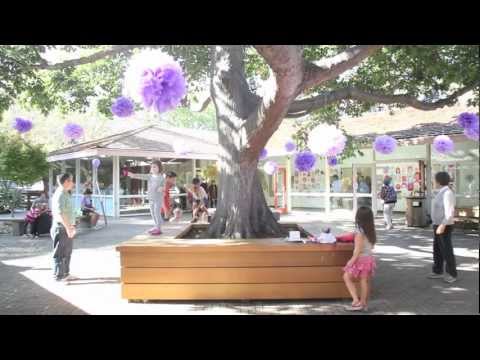 After more than a year of construction, the renovated Palo Alto Art Center reopened on Saturday, Oct. 6, with a free public open house from 11 a.m. to 5 p.m.

New exhibitions were on display, while art activities, live music and dance performances were held at the center at 1313 Newell Road in Palo Alto.

The made-over main gallery at the center is packed to the rafters -- with light. For decades, curators and visitors sighed at the low ceiling. Art doesn't like feeling cramped.

Now, the ceiling has been raised up to the building's rafters, which are newly painted white to better accentuate exhibitions.

This is the first major renovation for the building, which was built as Palo Alto's City Hall. The upgrade was financed by a public/private partnership between the city and the Palo Alto Art Center Foundation, a nonprofit.

The building was designed by Palo Alto architect Leslie Nichols. When it opened in 1953, newspapers described the grouted-brick building with shake roofs as "Ranchero style" and "country club," according to an art-center flier. Later, City Hall moved downtown, and the building was turned into a cultural center in 1971.

Looks like a wonderful community gathering place and a great renovation by the City of Palo Alto workers. Congratulations!

Love the spirit of the place and glad that we as voters funded it ... one of the gems of Palo Alto !

LOVE the video. Couldn't make the opening, but am anxious to get over to check out the new Center. Karen K. is a master at making things happen.

The Grand Reopening of the Palo Alto Art Center was a huge success. The exhibits, the music, the dancing and most of all the high energy from all the adults and children enjoying the new space was very exciting. Thank you Palo Alto, thank you Art Center Foundation!

I too love the video and can't wait to get over there! Congrats to the tireless staff and volunteers for this jewel of civic engagement. Thank you!

A Pragmatic Approach to A Trillion Trees
By Sherry Listgarten | 4 comments | 3,966 views

Singapore's oldest cafe was about to open in Palo Alto. Then, the coronavirus hit.
By Elena Kadvany | 1 comment | 2,877 views

Repairing a Disagreement with your Beloved & “Physical” vs. “Social” Distancing
By Chandrama Anderson | 2 comments | 2,660 views

The University of California’s flexible policies during COVID-19
By John Raftrey and Lori McCormick | 6 comments | 2,615 views