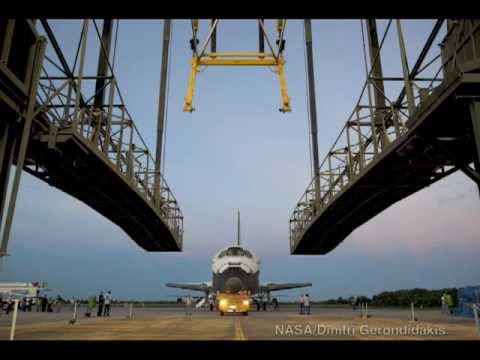 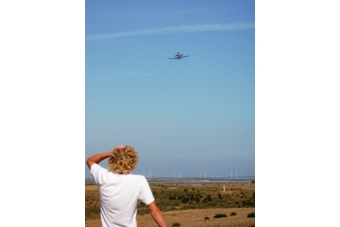 A massive crowd gathered on the tarmac at Moffett Federal Airfield Friday morning to watch the historic last flight of Space Shuttle Endeavour as it was ferried to a museum in Los Angeles.

After causing traffic jams on U.S. Highway 101 as it flew down the Peninsula perched atop a specially modified jumbo jet, Endeavour made its appearance at 10:37 a.m., turning in from the Bay and aimed at Moffett's historic Hangar One, which briefly blocked the crowd's view. Flying little more than 200 feet above NASA Ames Research Center, it then flew south over Mountain View and into the horizon to end its 123-million-mile journey, having orbited the earth 4,671 times over two decades.

Over NASA Ames, the shuttle flew near the the wind tunnel complex where 90 percent of its aerodynamic research went on, the vertical flight simulator where every one of its astronauts has trained, where a supercomputer calculated how much ice buildup on its tanks was safe, and the laboratories where its heat-resistant tiles were invented, which kept the shuttle and its pilots from burning upon re-entry into the atmosphere. Tiles "for which I am very thankful," said Stephen K. Robertson, an astronaut who flew Endeavour to the International Space Station in 2010.

When its rocket boosters light, it's "like being rear ended at a traffic light, a big jolt and then you are off into the sky," Robertson said. On the 2010 launch "We went into a cloud layer lit up like the fourth of July...the most spectacular I've witnessed."

The space shuttle "really captures your imagination," said Jason Aramante, a young tech worker who said his interest in technology may have begun as a child, "reading, writing and drawing " the shuttle.

"Perhaps one of the students here today will recall this moment of watching the space shuttle Endeavour pass overhead when he or she steps foot on Mars in the 2030s," said Ames director Pete Worden. He added that "We can't talk about that program, it's classified," drawing laughs.

"I want to emphasize that NASA is alive and well," Worden said. "We are on our way into the solar system. We are going to be going around the moon in the next decade, we are going to an asteroid and then we are going to Mars. This journey is just beginning."

Retired Air Force officer Donald Covey said that seeing the Space Shuttle was on his "bucket list" along with seeing the Great Wall of China and Egypt's pyramids. "Seeing the shuttle, it's pretty spectacular," Covey said. "They probably ended the space shuttle program a little too early."

Also nostalgic was Diane Davis, who recalled attending a space shuttle launch in which she could feel "internally" the "amazing force" of its rocket boosters. She brought her elementary school-aged kids to the event so they could say one day that 'I remember when my mom took me to see the space shuttle.'"

Information booths provided educational materials to event-goers, including a list of inventions that came from the space shuttle program, such as an artificial human heart that uses the shuttle's fuel pump technology and light-emitting-diode technology developed in space shuttle experiments that may soon be used to kill cancerous tumors.

"It shows what people can accomplish when people put their heart into it," Robertson said of the shuttle program.

Following its Bay Area visit, the shuttle was set to pass over the Monterey Peninsula and near San Luis Obispo before landing at Los Angeles International Airport around noon.

Named for the first ship commanded by 18th-century British explorer James Cook, the Endeavour first went into space in 1992 and was decommissioned by NASA last year. It was built to replace Challenger, the space shuttle which exploded shortly after a launch in 1986, killing seven astronauts.

Endeavour will eventually end up in Southern California at the California Science Museum in Los Angeles at a display opening on Oct. 30.

Not sure about Shoreline, but Palo Alto Baylands was packed with people and we had a wonderful sighting as Endeavour flew over our heads. Traffic backed up for over 90 minutes trying to get back along Embarcadero to pass over highway 101.

You should have walked over the pedestrian bridge near Embarcadero Road. Too bad there is no more pedestrian crossing over Hwy 101 in southern Palo Alto.

I didn't say I was sitting in traffic for 90 minutes. The people I spoke with were from all over the Bay Area, not just locals. I went for a hike for about an hour and just sat and watched the traffic ease before I decided to leave. I just didn't realise that there was parking for that many cars to cause that much gridlock.

There were Highway Patrol officers directing traffic by the airport, but the real problem appeared to be the two sets of lights just before the 101 onramp. One set was green but traffic couldn't move because the other set was red and side traffic managed to block the intersection so that Embarcadero traffic hardly moved. This was at the tail end of the traffic as there was very little at the Baylands when I decided to leave.

The Embarcadero intersection is a picnic compared to the mess at Mathilda and 237. At any rate, the fly-by was a crowd pleaser along the eastern fenceline of Moffett. Nice photos above by Keith and Jocelyn. I can identify the bridge over Stevens Creek in photo #3, but Jocelyn must have gone further east to get those underside aircraft shots.

Report Objectionable Content
Email Town Square Moderator
Like this comment
Posted by Bike People a re unrealistic
a resident of Community Center
on Sep 21, 2012 at 3:15 pm

WE should build a 9 million dollar bridge so once in our lifetimes you can walk to the baylands to watch the shuttle. give me a break. were broke people. Regardless of where the money comes from we dont have it and if its state or federal money its borrowed from our grand kids.

It was a fabulous sight, I only mentioned the traffic because it was the best gauge of how many people were in Palo Alto to watch.

I feel slightly disappointed that the Weekly sent their photographers to Mountain View rather than our own Baylands as we had a terrific atmosphere, a great view, and showcased our own open spaces.

Too bad they didn't circle over moffet again like they did everywhere else. A lot of us only saw a bit from our vantage point across from
101 and moffet.

Great photos, Jocelyn! After waiting for 1 1/2 hours at Byxbee Park, I had to leave for an appointment before the shuttle arrived. Luckily I got to see the shuttle from my front yard, but it wasn't quite the same.

I was leaving SFO after dropping off family members for their flights and hoping to see the shuttle, so tuned in the radio news and heard the shuttle was coming very soon, so I drove quickly right into Millbrae and parked at a bayside restaurant parking lot. There I found about 100 people - we were close to SFO and noticed when the ground stop occurred there- the fog lifted and we saw the shuttle, though its route surprised us a bit. Some people had binoculars, which were helpful. One of my family member had a slightly delayed flight because of the flyover, but SFO clearly tried to do as many landings and takeoffs as possible (shuttle circled over Berkeley or some such, so there were TWO groundstops, I believe). Anyway, the news media has not documented that people like us were at a bunch of spots along the bayshore, such as nearby Coyote Point and informal gathering spots like where I was, where there was a festive atmosphere.Some folks were fortunate to be able to step out of their nearby offices and see the shuttle. I think the shuttle was a really cool piece of engineering (I am not an engineer but that is my personal opinion)

Thanks for the video

For those standing too close to the Hanger 1, all we saw was the last 30 sec of this movie as Endeavour passed by.

The first few seconds after awakening; before I remember the virus
By Chandrama Anderson | 0 comments | 3,131 views

Can you stay healthy without making more trash?
By Sherry Listgarten | 4 comments | 2,518 views

Think about helping others in our coronavirus-affected area
By Diana Diamond | 5 comments | 2,331 views